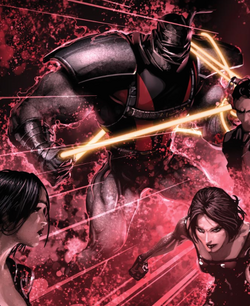 Now, I will bathe my coils with your blood, even if it kills me.

Senyaka was a mutant recruited by the mutant Fabian Cortez as a member of a second group of the Acolytes. On one mission, this new team of Acolytes attacked the Our Mother of The Sacred Heart school whilst searching for a mutant child.[2] When Magneto again assumed control of the Acolytes from Cortez, Senyaka's bloodthirstiness displeased his lord Magneto. Consequently, Senyaka was apparently slain by Magneto who crushed Senyaka with his own coils.[3]

Senyaka survived, however, by siphoning the life energy from agents of the international law enforcement agency known as S.H.I.E.L.D. who had recovered Senyaka's body. Seeking revenge on Magneto, Senyaka set out to kill sea captain Aleytys "Lee" Forrester, a former paramour of the self-styled master of magnetism. Forrester teamed up with the mutant soldier from the future named Cable, and Senyaka was seemingly killed once more in the ensuing battle.[4]

Senyaka later reappeared as a member of a faction of Acolytes led by Exodus who participated in an assault on Wundagore Mountain in the European country of Transia, home of the enigmatic scientist known as the High Evolutionary. The Evolutionary had developed a powerful mutagenic compound known as Isotope E, which the Acolytes coveted.[5]

After Exodus was defeated, Senyaka found himself amongst the ranks of former Acolytes who aided the human Carrion Cove Rebellion against Magneto's rule of the island nation of Genosha, as part of a plot of Cortez.[6] Senyaka survived the genocide of the Genoshan population at the hands of giant mutant-hunting robot Wild Sentinels controlled by Cassandra Nova, the genetic twin of Professor Charles Xavier, and joined Exodus and his fellow Acolytes when they allied themselves with Mister Sinister and his Marauders. He was tasked with assassinating Cable and destroying Providence. Even though Cable survived the assassination attempt, Providence was destroyed, and Senyaka seemingly perished in the process.[1]

However, Senyaka later resurfaced as one of Selene's Death Dealers.[7]

During the Necrosha event, Senyaka assaulted Utopia with the rest of Selene's followers, and was responsible for the death of Meld.[8]

He later met his end on Genosha when Wolverine and X-23 decapitate him.[9]

Bio-Electrical Essence Absorption: He possessed of the power to drain the bio-electrical essence of others upon physical contact. The living energy he drained augmented his natural strength, endurance, and reflexes, as well as accelerating his recuperative powers significantly. He also seems to be able to drain life force even while apparently dead.

Psionic Bio-Electric Whips: Senyaka could also utilize the excess life-force he drained to generate a pair of psionic whips composed of bio-electric energy. These whips moved according to his mental command and could greatly increase the distance of his absorption ability. The whips could also conduct his bio-electric energy to ignite nerve clusters in an opponent to cause intense pain or paralysis, as well as sear into their flesh.

Like this? Let us know!
Retrieved from "https://marvel.fandom.com/wiki/Suvik_Senyaka_(Earth-616)?oldid=6489058"
Community content is available under CC-BY-SA unless otherwise noted.