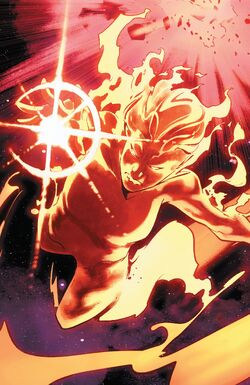 You stay back. You stay the Hell away from me or I'll set this entire galaxy on fire! The Starbrand will kill you all!

Suzanne Selby worked a limestone plant in Kansas City for fifteen years until Roxxon closed it down and moved it to Madripoor. Out of work and several months pregnant, Suzanne and her boyfriend were recruited by space coyotes to work on grape harvests around the Shi'ar Galaxy.

After she and her boyfriend became separated somewhere in the Reigarrt System, Suzanne was detained by the Shi'ar border patrol for being an illegal alien. No agencies on Earth were alerted by Suzanne's arrest, as relations between Earth and the Shi'ar Empire had become conflicted following an incident when the Shi'ar tried to assassinate the resurrected Phoenix, so she was sentenced by the Shi'ar Intergalactic Court to spend the next three years in Ravenstarr Prison Galaxy, while her unborn child was sentenced to two years, pending birth.

During transport to Ravenstarr, and as she was going into labor, Suzanne was given the power of the Starbrand. The empowerment caused Suzanne to destroy the prison cargo ship, sending her on a path of destruction as she tried to control her new powers.[1] This incident and Suzanne's subsequent rampage caught the attention of both the Shi'ar Majestor Gladiator and three former Heralds of Galactus, who intended investigate the new threat.[2]

At the request of Gladiator, the Avengers were alerted about the incident, and went off to Ravenstarr to investigate, soon discovering that it involved the Starbrand.[3] The heroes came into conflict with the Heralds, who had set out to kill the new Starbrand.[2] Suzanne was eventually cornered by Gladiator,[4] but he was intercepted by the Avengers. The Avengers fended off Suzanne's would-be killers, with Captain America and She-Hulk helping deliver the baby. The stress from both the labor and the power of the Starbrand were too much for Suzanne, and she died during childbirth. Her last words were that no matter what happened, her baby should return to Earth. The Avengers returned to Earth with Suzanne's body and the newborn baby girl, who had inherited the Starbrand from her mother.[1] The heroes would eventually dub the baby Brandy.[5]

Presumably those of Kevin Connor of Earth-616.

Like this? Let us know!
Retrieved from "https://marvel.fandom.com/wiki/Suzanne_Selby_(Earth-616)?oldid=6436793"
Community content is available under CC-BY-SA unless otherwise noted.