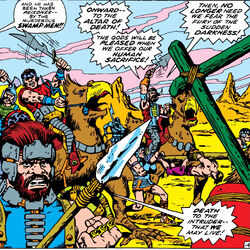 The Swamp Men are a Neanderthal society of hunter-gatherers that live in the swamp lands of the Savage Land.[1] They are known for their superior hunting skills that ride on giant bird beasts. They are a war-like tribe who are frequently at war with each other or with neighboring cultures.[2] However they did have some trade links with the agrarian tribe of the Hill-Forest People.[3]

The Swamp Men are the descendants of the humans of the empire of Atlantis. When the empire fell the people were scattered throughout the land forming their own tribes.[2]

At one point, they worshiped Umbu the Unliving, an android that had been left on Earth by the Sagittarians, an alien race who had visited the Earth centuries ago.[4]

The Swamp Men encountered the X-Men who traveled to Antarctica to investigate the Savage Land. They attacked the outsiders and easily get the drop on them, knocking most of their numbers out with swamp gas and kidnapped Jean Grey. Witnessing the battle, Ka-Zar went to the X-Men's rescue with the aid of his tiger Zabu, he agreed to help them free their friend from the Swamp Men. The Swamp People also captured Angel who was scouting the land from the air and brought back to their village. They brought them to the top of a hill where they were to be sacrificed to a deadly Tyrannosaurus Rex. The X-Men and Ka-Zar break into the village, Jean managed to compose herself to use her telekinetic powers to trip up the T-Rex and free herself and Angel. Able to fly away, Warren grabbed Jean and the two join their comrades in battle. Smashing through the defenses, Ka-Zar helped the X-Men dodge the Swamp Men's death traps and called a herd of Wooly Mammoths to smash through the wooden fence that surrounds the village. Ka-Zar and the X-Men made short work of the Swamp Men, sending them fleeing into the jungles in defeat.[5]

Ka-Zar and Zabu became aware of an attacking party of Swamp Men that were seeking out the jungle lord in order to destroy him. When the Swamp Men attacked Skull Island, Ka-Zar and Zabu went to stop them.[6]

Two members of the Swamp Men went to Skull Island to investigate the constant burning fires. Their they discover the The Plunderer's base and get the drop on two of the Plunderer's guards. With the guards downed, one of them picked up his vibra-gun and accidentally activated it, blasting a hole in the Plunderer's base. The explosion prompts the Plunderer to send his troops out to chase after the savages. They also freed Namor the Sub-Mariner was being kept prisoner at the time. He attacked the Plunderer, however the chief of the Swamp Men, unable to make a distinction between the two combatants dropped a rock down on both of them, pinning Namor under the rock.The Plunderer blasted the savage with his vibra-gun and escaped, however Namor revived and he rescued the chief of the Swamp People before Skull Island exploded. Taking the chief to the shore, he was welcomed to the Swamp People's home to celebrate. [7]

Magneto came to the Savage Land, finding mutations that occurred easily in this land due to high levels of radiation, Magneto assembled members from the Swamp Men himself "the Creator," subjected them to experiments that greatly enhanced their physiology, creating the Savage Land Mutates.[9] When the superhero team of mutants, the X-Men, were exploring the Savage Land, the Mutates battled the X-Men and X-ally, the Savage Land protector known as Ka-zar. Revealing the Creator as Magneto, the X-Men were captured until Jean Grey ultimately destroyed Magneto's headquarters and machines, burying Magneto under the debris and reverting the mutates back to their non-superhuman state.[10]

A couple Carla and Ralph come to the Savage Land with a Swamp Tank to steal Ka-Zar's vibranium, but when they force him to open the door to where it is stored the vibranium destroys the tank. Carla is carried off and killed by the Swamp Men when Ralph is not able to save her because the gun he was using only had blanks due to Carla replacing the bullets with blanks in an effort to get Ralph killed.[11]

The Swamp Men encountered Spider-Man who had come to the Savage Land to find Stegron. Spidey teamed up with Ka-Zar and battled Dinosaurs and Swamp Men at all sides, the two fail to stop Stegron who escaped in an airship loaded with Dinosaurs.[12]

Clete Brandon a former and soldier and mercenary who crash-landed in the Savage Land after a failed coup in South America. Ater destroying a village of the Swamp Men who had attacked him, he began living with a tribe of apes.[13]

The Swamp Men and the mutates later allied with Zaladane when she attempted to conquer the Savage Land. They kidnapped Polaris from Punta Arenas, Chile. The X-Men tried to intervene but fought to a stalemate and Zaladane and her forces agreed to leave in peace taking Polaris with them, but failed to notice that one soldier in her army is none other than the disguised Havok.[14][15]

During the Secret Invasion, some of the Swamp Men joined Ka-Zar to fight the Skrulls.[16]

The Swamp Men were invited to join the United Council of Tribes. It was created by the Zebra People to bring peace to Pangea. A member of the tribe was present when Torran of the Ethereals crashed the meeting.[3]

Retrieved from "https://marvel.fandom.com/wiki/Swamp_Men_(Earth-616)?oldid=5551581"
Community content is available under CC-BY-SA unless otherwise noted.