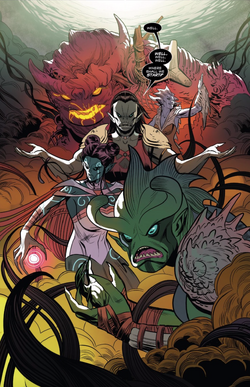 The Black Tide, originally known as the Swift Tide, were a team of Atlantean warrior women who had fought to overcome the sexism of Atlantean society and attained celebrity status across the undersea world for their skill and combat prowess. With members from Imperial Atlantis, the Chasm People, and other undersea civilizations, the Swift Tide embodied hope of cooperation and peaceful relations between the rival groups, and defended all of the sea peoples that lived in peace.

In the 1930s, the Swift Tide discovered the location of the evil relic known as the Unforgotten Stone,[1] a stone prison containing the evil power, if not the very souls, of the Great Old Ones,[4] and brought word of it to a diplomatic meeting between the Chasm People and Atlantis, helping fend off an assassination attempt on the political leaders and government officials by Chasm People rebels. King Attukar of the Chasm People and Warlord Krang of the Atlantean Empire decided to send the Swift Tide on a mission to retrieve and dispose of the Unforgotten Stone before it could be discovered by humans; and assigned Prince Namor of the Atlantean Empire and Prince Attuma of the Chasm People to accompany them hoping to encourage a friendship between the two princes and thereby ease political tensions between their peoples.[1]

The expedition uncovered that the Unforgotten Stone had been stolen by Soviet scientists and the Thule Society, who unwittingly activated it. Engulfed by its eldritch power, the Swift Tide were corrupted and fused with their mounts to become predatory monsters resembling Deep Ones.[3] Renaming themselves the Black Tide, they slaughtered the Chasm People present at the the diplomatic meeting - including King Attukar - and rampaged until they were subdued and exiled to the depths of the Mariana Trench,[1][5] where they lay dormant until approached by Namor, who sought to recruit them to fend off Knull's invasion of Earth.[3]

As Namor had feared, following Knull's defeat the Black Tide refused to return to exile and disappeared, leading to Namor's Defenders of the Deep hunting them down.[5]

Captain Kharsa's sword, Sycorax's magic, Garanna's club; claws and fangs as the Black Tide. As a member of the Black Tide, the Mountain was turned into a creature comprised of living lava.[5]

Each of the members of the Swift Tide had a personalized mount. The Unforgotten Stone merged each of them with their mounts - replacing Kharsa's legs with sharklike fins, Sycorax's lower body with tentacles, Sweet Mercy's limbs with blades, and Garanna's lower body with that of her ray.[5]

Like this? Let us know!
Retrieved from "https://marvel.fandom.com/wiki/Swift_Tide_(Earth-616)?oldid=5995645"
Community content is available under CC-BY-SA unless otherwise noted.