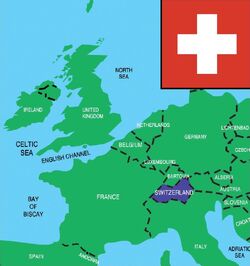 Switzerland, officially the Swiss Confederation, is a federal republic in Europe. Switzerland is a landlocked country geographically divided between the Alps, the Swiss Plateau and the Jura. It's capital city is Bern, while it's largest cities are Zurich and Geneva. Switzerland is a neutral country and is not a member of N.A.T.O. nor the European Union.

The major languages in Switzerland are French, German, Italian and Romansh.[1]

In 1962, Bern, Switzerland, Erik Lehnsherr forces a banker by ripping out one of the metal fillings in his mouth using his powers, to trace a bar of Nazi gold to Sebastian Shaw's address in Argentina.[2]

In 1999, Bern, Switzerland,Tony Stark a New Years Eve party first met Ho Yinsen while extremely drunk.[3] He then met a scientist named Dr. Maya Hansen, inventor of Extremis- an experimental regenerative treatment intended to allow recovery from crippling injuries. Disabled scientist Aldrich Killian offers them a place in his company, Advanced Idea Mechanics, but is turned down. He went to bed with Maya and left Aldrich on the roof to think about the future.[4]

In this reality, Tony Stark was introduced to the Kratos Club club in Zurich. [5]

Like this? Let us know!
Retrieved from "https://marvel.fandom.com/wiki/Switzerland?oldid=5312418"
Community content is available under CC-BY-SA unless otherwise noted.