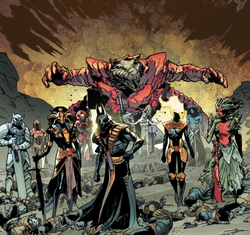 When the forces of Arakko, led by the First Horsemen of Apocalypse, entered Otherworld they ravaged Dryador. Using the External Gate, Apocalypse led a group of mutants to Otherworld where they were almost immediately ambushed by First Horsemen of Apocalypse and Summoner. To end the fighting, Omniversal Majestrix Opal Luna Saturnyne offered the Horsemen and the X-Men the opportunity to enter a tournament of champions. With no alternatives, both sides accepted the offer and Saturnyne magically implanted the tournament weapons and champions into the minds of Polaris and Pestilence.[1]

With only three days prepare for battle, the chosen swordbearers set out to gather their swords. War and Pestilence travelled to The Tower of Broken Will to release Solem. After being freed, Solem travelled to Hell and enlist the aid of Wolverine to obtain the Muramasa Blade.[3][4]

Retrieved from "https://marvel.fandom.com/wiki/Swordbearers_of_Arakko_(Earth-616)?oldid=5868814"
Community content is available under CC-BY-SA unless otherwise noted.