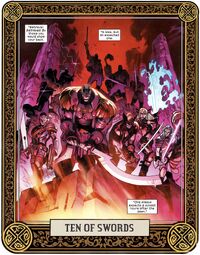 Muramasa. The Sword of Might. The Starlight Sword. Grasscutter. Godkiller. Warlock. The Soul Sword. The Scarab. The Light of Galador. Skybreaker.

When the forces of Arakko, led by the First Horsemen of Apocalypse, entered Otherworld they ravaged Dryador. Using the External Gate, Apocalypse led a group of mutants to Otherworld where they were almost immediately ambushed by First Horsemen of Apocalypse and Summoner. To end the fighting, Omniversal Majestrix Opal Luna Saturnyne offered the Horsemen and the X-Men the opportunity to enter a tournament of champions. With no alternatives, both sides accepted the offer and Saturnyne magically implanted the tournament weapons and champions into the minds of Polaris and Pestilence.[2]

After returning to Krakoa and discovering that Rockslide's death in Otherworld was permanent, Polaris constructed a casting circle in the Voltus Glade to transport the Swordbearers of Krakoa to the tournament.[1]

With only three days prepare for battle, the chosen swordbearers set out to gather their swords. Wolverine had to travel to Hell and enlist the aid of Solem to obtain the Muramasa Blade.[10][8] Storm travelled to Wakanda, where she stole the Skybreaker after being told she would not be able to use it.[7] Already armed with their swords, Magik used her Soulsword to train Cypher and Warlock.[6] Cable was also called back to Krakoa from The Peak with The Light of Galador.[4] Knowing of the prophecy, Brian Braddock unearthed the Sword of Might from its burial spot beneath the Braddock Lighthouse, and after deceiving Saturyne, Betsy Braddock obtain the Starlight Sword. Together, Betsy as Captain Britain and Brian as Captain Avalon join the other swordbearers armed with the Starlight Sword and Sword of Might respectively. Despite their apparent destruction, Gorgon was able to regain both Grasscutter and Godkiller. Finally, after recovering from injuries, Apocalypse went to the Temple of the Horsemen, where he retrieved and resembled the Scarab.[3]

Retrieved from "https://marvel.fandom.com/wiki/Swordbearers_of_Krakoa_(Earth-616)?oldid=5815696"
Community content is available under CC-BY-SA unless otherwise noted.