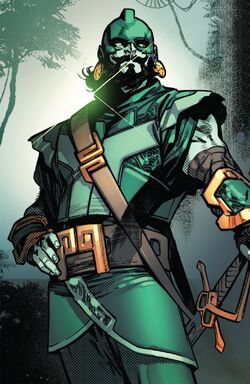 The boy's father whispers in his ear--poisoning him against his human heritage and against all animal life in turn.

The elder Cotati was one of the immobile Cotati brought to Earth by the Priests of Pama and planted within a temple in Vietnam.[2]

After their battle with Kang the Conqueror, the Avengers took Swordsman's body to the temple where Mantis was raised.[3] There, the elder Cotati revived Swordsman's corpse in order to marry Mantis,[4] since she was the destined "Celestial Madonna".[5] While the Avengers traveled back in time to solve the mystery of Mantis' past, the Cotati possessing Swordsman's body met with Libra and awaited her return.[6] When the Avengers returned,[2] Moondragon also arrived and explained to the involved parties the prophecy of the Celestial Madonna.[7] As he was about to propose to Mantis, Kang interfered and tried to abduct her. Thankfully, Immortus rescued Mantis and replaced her with a Space Phantom. As they prepared to get married they found out that Vision had also proposed to Scarlet Witch and it was decided to have a double marriage. After their marriage they both transformed into pure energy and left Earth to mate, while their bodies remained behind,[5] leaving the priests to bury their bodies.[8] However, while on Tamal, Swordsman was expelled and unable to connect to the Cotati collective, because the memories of its human host had changed his mind, which left him in anger.[9]

After giving birth to a pod that would become Sequoia, Mantis was forced to leave, since Swordsman and the Cotati felt that they were more fit to raise their son, the "Celestial Messiah" alone on Tamal.[10][11] After she and her team, the West Coast Avengers, returned to temple of Vietnam, Swordsman returned to his human body and after battling the team, killed Mantis' plant-based body allowing her to return to her body. When the Cotati's alien life-force subsequently vacated its host-form, the Swordsman's body disintegrated.[8] When Mantis went on a quest to retrieve her son, the Cotati and the Priests of Pama went to a pyramid where they allied themselves with Kang. They told Mantis and her allies, the Fantastic Four and the Silver Surfer to abandon her quest to retrieve her child. The heroes refused, not wanting her son to grow to become an emotionless being like the other Cotati, and battled the Cotati and the Priests. When Mantis began battling the Cotati with her psychic powers that she had learned from the Priests, the Cotati fled to their realm of pure thoughts with the pod, with Manti's psyche following shortly behind after leaving her body behind once again.[12]

Because Mantis failed to reunite with her son, Quoi grew to become arrogant and constantly angry, since he lacked motherly love during his life. When Thanos began a quest to destroy Quoi, Mantis, along with the Avengers, went to the planet Tamal to protect Quoi from Thanos.[13] After Thanos' henchman Raptra managed to kidnap Quoi, the Cotati and Swordsman turned on the Avengers since they believed that they were the reason for his disappearance. The heroes tried to fend them which lead Swordsman to disperse during the fight.[14]

Quoi eventually returned to Tamal, while Swordsman reformed himself. Whereas his son was welcomed into the Cotati collective, the Swordsman found himself ostracized due to his half-human nature. This contributed to the Swordsman' self-hatred, which manifested as a growing disdain for animal life, whom the Swordsman regarded as savage plunderers. Desperate to shed away his human self, the Swordsman stricked Quoi into accompanying him to the temple of the Priests of Pama where his original form resided alongside a Cotati grove, pretending that he simply wanted to return the original Swordman's sword to his grave. After revealing his true intentions and fusing back with his original form despite Quoi's heartache, the Swordsman's rest was interrupted when a group of Alchemax workers tore down the grove. Swordsman broke off from his original form and killed the workers, horrified by the fact he was the grove's only survivor. This episode caused Quoi to embrace the Swordsman's stance against animal life.[15]

The Swordsman further fueled Quoi's new-found hatred for animal life by telling him about the massacre of his ancestors at the hands of the Kree in the incident that sparked the Kree/Skrull War. Because of this, Quoi led the Cotati into targeting the two species. Quoi and the Swordsman developed a power-boosting flower called the Death Blossom, capable of extending the reach of the Cotati's plant-controlling powers. Their testing of the Death Blossom in Skrull and Kree territory alerted both empires, prompting them to put aside their differences and establish the Alliance, which was spearheaded by its figurehead, Hulkling.[16] The Cotati forces converged in the Blue Area of the Moon, where they grew a garden to plant a Death Blossom. With the Alliance speeding towards the Earth, the Cotati reached out to the Avengers, using their pacifist pretense to earn their trust and gain their protection from the Alliance.[17] The intervention of the Avengers and the Fantastic Four when the Alliance arrived bought the Cotati enough time for the Death Blossom to bloom, which gave Quoi enough power to cripple the Alliance's war fleet and launch an invasion on Earth.[18]

The Cotati focused their military forces in Wakanda, since their end goal was to plant a Death Blossom in its Vibranium-enriched soil to enhance Quoi's powers to a cosmic level.[19] Once Wakanda's defenses were breached, the Swordsman and Quoi arrived to plant the tulip.[20] They were quickly intercepted by a contingent of Earth's heroes as well as the Alliance's forces. The turn in the tide of the battle prompted the Swordsman to hold Quoi at sword-point in an attempt to escape, showing his true villany, shocking the Cotati's own soldiers. The Swordsman was stabbed by Black Panther using Hulkling's Star-Sword, and then impaled into the Death Blossom, destroying both.[21]

Just like most of the Cotati, Swordsman, or Elder Cotati, had a nature of love and peace. Being recognized as the perfect plant, he was eager to fulfill the prophecy of the Celestial Madonna, genuinely feeling love for Mantis, and had a good relationship with the Avengers. Just like Mantis, he referred to himself in the third person as "this one", which was apparently a custom of the Priests of Pama (similarly to real-life Eastern religions like Hinduism and Buddhism).[5]

However, the memories of his host, Jacques Duquesne, had changed his his mindset and nature causing to be expelled from the Cotati collective, leaving him in anger.[9] Despite this he still retained his nobility, still seeing the heroes of Earth as allies even when the entire collective was angry at them when thought that they were responsible for the abduction of Quoi,[14] although he was ready to fight them in order to accomplish his objectives.[8] As time went on, Swordsman began feeling hatred for his son, seeing him as he was adored by the Cotati, while himself was excluded. He eventually abandoned all of his morals when he witnessed some humans killing his fellow Cotati of Vietnam and in return killed them all, seeing them equal to the Kree and Galactus as destroyers of worlds. He eventually better his relationship with his son once he saw that Quoi truly cared about him,[15] and after being forcefuly accepted again by the collective, waged war on the Alliance, Earth, and animal-based life of the universe.[22]

Cotati Physiology: Being a member of the alien race known as the Cotati, Swordsman demonstrated the following powers:

Seemingly those of Swordsman.

Quoi's Golden Sword: After leaving behind Jacques' sword behind, Quoi grew inside of him a new golden sword which he could use to fight for the Cotati.[15]

Like this? Let us know!
Retrieved from "https://marvel.fandom.com/wiki/Swordsman_(Cotati)_(Earth-616)?oldid=6491330"
Community content is available under CC-BY-SA unless otherwise noted.