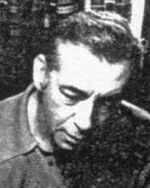 Sydney Shores was a graduate from Brooklyn's Pratt Institute, where he had met his wife-to-be, Selma, who was a cousin of early comic book artist, Harry "A" Chesler.

Shores worked at Timely Comics as a penciler, inker and colourist during the Golden-Age of comics. Initially working as an inker, Shores later began embellishing some of the earliest pencil work of industry legend Jack Kirby.

For a short time, Shores was induced into the service during World War II. After his military discharge in January 1946, Shores returned to Timely as art director.

Like this? Let us know!
Retrieved from "https://marvel.fandom.com/wiki/Syd_Shores?oldid=4207164"
Community content is available under CC-BY-SA unless otherwise noted.