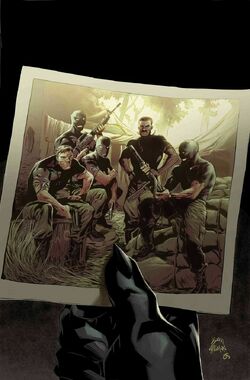 During the Vietnam War, Project S.H.I.E.L.D. - the precursor of S.H.I.E.L.D. - excavated the body of an alien dragon made of living darkness, which they codenamed Grendel. As part of a series of clandestine supersoldier programs intended to replace the MIA Captain America,[1] a team led by Nick Fury began experimenting on extracted samples of its biomass. Discovering that the samples could be bonded to lifeforms to create predatory monsters, immediately proceeding to human trials by bonding samples to a group of wounded soldiers.[2][3][4]

These symbiote-augmented super-soldiers were sent on black ops missions, but the primordial symbiote was indwelled by a malevolent deity that possessed the ability to corrupt symbiotes and send them into feral rampages. Despite some initial success, the Sym-Soldiers quickly succumbed to their symbiotes' bloodlust, went insane, and began devouring Việt Cộng and American soldiers alike. Nick Fury subsequently declared the Sym-Soldiers a liability and contacted Logan to assist him in hunting them down. They were joined by Rex Strickland, whose symbiote had separated from him; but Fury subsequently attempted to kill Logan and Strickland by detonating a Life Model Decoy so as to not leave any witnesses.[3] Strickland was killed, but his symbiote survived and impersonated him, becoming an Agent of S.H.I.E.L.D.;[5] while the other Sym-Soldiers were cryogenically frozen and the program was officially declared a failure and shut down.[6][3][7]

Following the collapse of S.H.I.E.L.D., the cryogenically-frozen symbiote super-soldiers and the primordial symbiote-dragon were being transported to a black box site to be terminated when the convoy was attacked by Venom - acting on behalf of Rex Strickland's symbiote, who wished to rescue its brethren. However, the super-soldiers' symbiotes were corrupted by the malevolent entity and killed their hosts before being absorbed into the primordial symbiote they had originated from.[6]

Following S.H.I.E.L.D.'s termination of the original Sym-Soldier Program, Weapon Plus appropriated the remaining personnel and samples of the Grendel symbiote, establishing the Weapon V program - also known as Project Venom. Nick Fury's role in establishing the original Sym-Soldier Program led to him receiving credit as the founder of Weapon V,[1] though he was never actually involved.[7]

Decades later, the U.S. Army's Overreach Committee - under the command of General Arlen Dunleavy - employed Eddie Brock (the host of the Venom symbiote) as a black-ops agent.[8] Assigned Agent Darryll Smith as his handler, Venom was outfitted with a bomb to keep him under control and sent to eliminate threats like the Russian terrorists Doctor Yes and Red Flag,[9] and the arachnoid cyborg Teraknid.[10] However, Venom grew disaffected with how Overreach Committee was treating him and went rogue.[11]

Years later, when the Venom symbiote was stripped from Mac Gargan, the US Army rebooted the Sym-Soldier Program as Project Rebirth 2.0. The initial volunteer, Cal Henricksen, lost control of the symbiote and was killed,[12] though Corporal Flash Thompson was successful in subduing the symbiote with the help of a Symbiote Inhibitor serum and became the black ops supersoldier known as Agent Venom.[13] Initially signed up for 20 missions, Agent Venom carried out several operations and quickly ran afoul of the Crime Master's criminal syndicate, but went AWOL after being made and having his loved ones threatened.[14] Following the Spider-Island incident, Project Rebirth 2.0 was shut down by Captain America.[15][16] However, the US government and military, inspired by Agent Venom's initial success, continued to pursue the use of symbiote super-soldiers.[7]

General Brandon Duggan established PROJECT LIQUID with the intent of forming a team comprised of weaponized symbiotes. To this end, the Agony, Lasher, Phage, and Riot symbiotes were recovered from Hybrid's corpse and bonded to new military-trained hosts; and Scorn was recruited and given training to improve her symbiote's unique technopathic abilities. However, Duggan was unable to recruit Toxin or Anti-Venom - the former having been killed by Blackheart, who took the Toxin symbiote for his own purposes; and the latter having given up the Anti-Venom symbiote to cure the Spider-Virus.[17] Agent Venom, Mercury Team, and Scorn were deployed to subdue Carnage and successfully defeated him, with a sample of the Carnage symbiote being obtained by Scorn.[18] However, the human members of Mercury Team were eventually hunted down and slaughtered by Carnage, with the symbiotes bonding to the team's German Shepherd war-dog and going AWOL.[19]

Following the Doverton Incident, the FBI established the Anti-Symbiote Task Force with the intent of capturing or killing Carnage; and forcibly recruited Eddie Brock - at the time the Toxin symbiote's host, who was assigned Agent Claire Dixon as a handler.[20] Brock sacrificed the Toxin symbiote to stop Carnage from summoning an eldritch god,[21] and became the de facto leader of the task force after Dixon's death. However, Brock went AWOL after re-bonding to the Venom symbiote,[22] which the FBI had separated from Flash Thompson in an effort to reclaim it.[23] Dixon, resurrected by the eldritch magic of the Darkhold, resumed leadership of the Anti-Symbiote Task Force and attempted to capture Venom so that his symbiote and its soon-to-be-born spawn could be used as military assets once more.[24]

Operating from the shadows, Weapon V appropriated resources developed by Project Rebirth 2.0 and other military and government-run symbiote supersoldier programs, using them to engineer weapons-grade symbiote bio-armor devoid of the "mental instability" that had rendered the Sym-Soldier prototypes a failure.

After Cletus Kasady bonded to the remnants of the original Grendel symbiote and began hunting current and former hosts, he attacked Weapon V's base and slaughtered most of the personnel present. The surviving members of Weapon V's Mars Team - led by Robert James Urquhart III - attempted to avenge their comrades with the forced assistance of Weapon H, but were betrayed by their head of R&D, Dr. Andrew Breen, and killed by Carnage.

Rather than destroy the remaining samples of the Grendel symbiote, the higher-ups at the Weapon Plus headquarters subsequently decided to put them in stasis until the threat posed by Carnage had been subdued.[7]

In addition to being equipped with military-issue body armor, the Sym-Soldiers were bonded to offshoots of the Grendel symbiote.[3]

In addition to the fangs, claws, and tendrils produced by their symbiotes, the Sym-Soldiers were equipped with machine guns and napalm flamethrowers.[3]

Like this? Let us know!
Retrieved from "https://marvel.fandom.com/wiki/Sym-Soldier_Program_(Earth-616)?oldid=6339351"
Community content is available under CC-BY-SA unless otherwise noted.