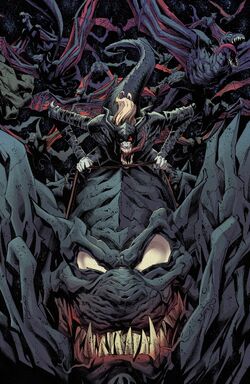 At some point early into his crusade against the Light brought into the universe by the Celestials, Knull learned he could manifest massive wyvern-like monsters out of the living abyss he commanded. Powerful enough to kill most gods, these symbiote dragons were used as everything from mounts to weapons of mass destruction capable of annihilating entire civilizations; and their constituent living abyss could be used to smother entire planets or infect gods and mortals alike, turning them into soldiers for Knull's army.[7][8][9]

A pair of symbiote dragons - one black and one red - arrived on Earth and attacked the Danes during the sixth century,[6] establishing a lair in a cave hidden behind a waterfall in Denmark.[10] In time a cannibalistic cult formed, worshipping the symbiote dragons and dedicating grotesque monuments to them.[10] The black symbiote-dragon - dubbed the "Grendel" by the local Danes - was ultimately struck down by Thor Odinson's divine lightning, the backlash of which severed Knull's connection to his hive-mind. While the Grendel was frozen in ice, most of the other symbiote dragons destabilized and dispersed into individual symbiotes, which sought out hosts to fill the void left by their disconnection from Knull; eventually rebelling against him and imprisoning him in the heart of the Symbiote Throneworld, which they renamed Klyntar.[2] Pieces of the Grendel symbiote fell to Earth and bonded to human hosts, who joined the symbiote-worshiping cult and dedicated it to worshiping Knull and freeing him from his prison.[11] The red symbiote dragon - which had become known as "Grendel's Mother" - went on a vengeful rampage and was eventually defeated by Thor as well, its body plunging into the North Sea.[12]

Decades later, Knull seized control of the Grendel and sent it on a rampage through Manhattan to reclaim the symbiotes extracted by the Sym-Soldier Program; though he was stopped by the symbiote-augmented antihero Venom and one of the Grendel's offshoots, Tyrannosaurus. The Grendel was immolated in a blast furnace alongside Tyrannosaurus, though a small piece managed to survive.[16] This piece was stolen by the Cult of Knull and bonded to the corpse of serial killer Cletus Kasady - reanimating him and marking him as Knull's apostle.[11] Seeking to restore the Grendel symbiote's deific power and free Knull, Kasady and the cult began hunting everyone who had ever bonded to a symbiote, but he was ultimately killed and stripped of the Grendel symbiote by Venom.[17]

Awakened by Venom absorbing the Grendel symbiote, Knull destroyed Klyntar and coalesced its constituent symbiotes into a fleet of symbiote dragons, once more embarking on his crusade to annihilate the cosmos.[18][19] While this occurred, Grendel's Mother began amassing an army of her own in preparation for Knull's arrival, coming into conflict with Scream.[20]

En route to Earth, Knull dispatched several of his symbiote dragons to spread as much destruction across the cosmos as possible. One symbiote dragon attacked Spartax, killing two billion people in the span of four hours before being engaged by the Guardians of the Galaxy. Wounded by the apotheosized Star-Lord, it retreated into space to regenerate before attempting to infect him and the other Guardians with its living abyss, but was ultimately destroyed.[21] Several of the remaining symbiote dragons were used by Knull to form a shell of living abyss around the Earth, while others remained separate - hunting down individuals to infect or devour.[22][23]

Symbiote dragons are vastly more powerful than lesser symbiotes, to the point of being capable of overpowering and killing gods;[2] and are highly-resistant to the traditional symbiote weaknesses of fire and sonics.[22] The Grendel symbiote in particular was described as deific due to its direct link to Knull,[24] though it's unknown if the other symbiote dragons possess this status. Symbiote dragons are capable of interstellar flight at speeds fast enough to match the likes of the Silver Surfer, and like lesser symbiotes, they can generate tendrils, blades, and spikes formed of living abyss.[25][26] At least one symbiote dragon possessed the ability to breathe fire.[27]

Like lesser symbiotes, the symbiote dragons possess fangs, claws, and the ability to create tendrils of living abyss to attack and subdue opponents.[25] At least some symbiote dragons, like Big Mother, were capable of breathing fire and other forms of energy.[31]

Symbiote dragons possess wings that enable them to fly at speeds rivaling the likes of the Silver Surfer.[9]

Retrieved from "https://marvel.fandom.com/wiki/Symbiote_Dragons_(Earth-616)?oldid=6106956"
Community content is available under CC-BY-SA unless otherwise noted.