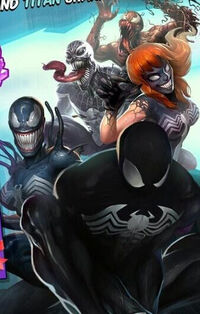 During one of her psychotic episodes, Scream hatched a plan to conquer the citizens of New York City. She caused the symbiote cells in individuals to mass produce and regain control of their hosts. With them, she amassed an army and set up Venom as the figurehead. When Superior Spider-Man reappeared, he created an ant-symbiote ray that returned control of the host bodies to the hosts.

When Carnage found out that Spider-Man, still infected with the Venom Symbiote, could be manipulated into releasing symbiote duplicates, he took the opportunity to create his own symbiote army. To aid his cause, he broke out Spider-Venom, an analog of Parker in a similar situation, out of S.H.I.E.L.D. custody. Eventually, Spider-Venom was confronted by Eddie Brock. This was Peter Parker's first encounter with the Anti-Venom Symbiote. His cells responded by creating their own Anti-Venom Symbiote and Peter not only stopped producing spawns, but also absorbed existing ones.

After arriving on Earth-TRN461, Poison planned to overtake the planet by travelling to the symbiote homeworld and creating an army. He stole Black Tarantula's interdimensional teleporter as a means of going home and convinced Mayhem to join him and recruit other symbiotes under the pretense that they were attempting to save the klyntar from extinction. After Poison and Toxin were defeated, Venom took control of The Symbiotes with the intent of actually saving the klyntar race.

When the war was over, The Symbiotes was imprisoned in the Symbiote Prison. They reorganized to free themselves from prison and extract revenge on Spider-Man.

Believing The Symbiotes were lacking strong leadership, Black Tarantula returned to Klyntar to take over the organization. He defeated Carnage and Venom and took out their sects. Unfortunately for Carlos, Scream was able to rally the rest of her troops to dethrone him.

When Venom took over Klyntar, he became a dictator. Some members of The Symbiotes defected a created a team known as The Pacifists. They opposed Venom's rule, dethroning him and disbanding The Symbiotes.

The Symbiotes would once again return under the leadership of Scream. Spider-Man traveled to Klyntar to hide the Power Stone from Thanos. Despite initial resistance, The Symbiotes agreed to help the Spider-Men, even accepting aid from The Pacifists.

While on assignment on Klyntar, Dead Aim stole the Power Stone. Rather than completing his assignment, he used the Infinity Stone to take over the planet. Luckily, he was eventually dethroned.[1]

Retrieved from "https://marvel.fandom.com/wiki/Symbiotes_(Earth-TRN461)?oldid=5612527"
Community content is available under CC-BY-SA unless otherwise noted.