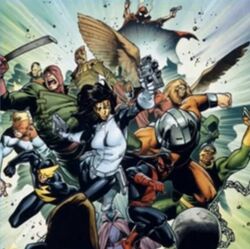 The Syndicate was a diversion only. I have drawn out my would-be rivals and you, Director Fury, have been kind enough to play your role by eliminating them. Now, you may enjoy the main event.

After a mysterious Pulse hit the Earth, it affected technology worldwide, left strange energy signatures, and traces of an unknown material. After this unknown material was researched by the diverse groups that form the Syndicate, it was discovered that it was a form of energy capable of giving an unknown power to the wielders of it.

Doctor Doom gathered all the villains together in order to extract all the power from the Isotope-8 and to form a team with possibilities of defeating the Alliance.

After the different factions which composed the Syndicate started fighting each other, Doctor Doom selected Red Skull, Doctor Octopus, Baron Zemo, Dormammu, Mephisto, Loki, Green Goblin to remain along him as the Syndicate.

After they were defeated by the Alliance and Magneto, Doom finally revealed the Syndicate to be just a distraction to prevent S.H.I.E.L.D. from noticing about his real plans with Iso-8.[1]

Like this? Let us know!
Retrieved from "https://marvel.fandom.com/wiki/Syndicate_(Earth-12131)?oldid=6082669"
Community content is available under CC-BY-SA unless otherwise noted.