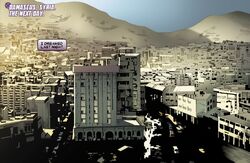 Syria is a country in the Middle East. De jure Syrian territory borders Lebanon and the Mediterranean Sea to the west, Turkey to the north, Iraq to the east, Jordan to the south, and Israel.

The region was once known as Mesopotamia the area of the Tigris–Euphrates river system, in modern days roughly corresponding to most of Iraq plus Kuwait, the eastern parts of Syria, and regions along the Turkish-Syrian and Iran–Iraq borders.[1]

The Playground is a secret base of unknown generation, operated by Nick Fury. Its original purpose is classified. It is located on the borders of Syria, Iraq and Saudi Arabia, which suggests that there are valid reasons for its secrecy.[2]

The Inhuman Royal family attacked the Latverian Embassy in Syria to find their missing family member.[3]

Marc Spector's psychologist helped him confront all the terrible missions he has been on one being to Syria.[4]

On Earth-26320; Dagon was the progenitor of the Vampire race. He was the terror of human kind in the very first moments of mankind's history, spreading his cursed blood all over the world. He went by many names, originally from the city of Babylon, in Mesopotamia and was known as called "Dagon" then as the centuries past he became known as "Dracula". He became bored of the world and decided to rest in a tomb in Syria. In the 21st Century, while searching for help in their fight with Blade, Danica Talos and Asher Talos find Dracula's tomb in the Syrian desert, and awaken him. After consuming dozens of humans in order to regain his strength and powers, Drake is informed by Danica on the situation of the vampire kind and on Blade, and, disgusted by their weakness, accepts to hunt down and kill the Daywalker. [5]

Like this? Let us know!
Retrieved from "https://marvel.fandom.com/wiki/Syria?oldid=5506048"
Community content is available under CC-BY-SA unless otherwise noted.