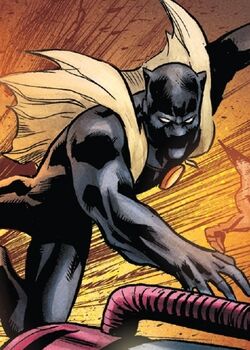 I see a great and new Wakanda -- the nation of my sons and their sons after them!

T'Chaka was the Chieftain of Wakanda, pledged to protect the sacred metal known as Vibranium, and like every chieftain before him. Born the first son to King Azzuri. From an early age he excelled in the ways of the warrior and took a stance of preserving Wakanda's heritage and honoring the "old ways" of magic despite the technological advancements of his nation. After his younger brother S'Yan was born he only grew further into the role of leader and protector. However, T'Chaka held an interest in improving Wakanda technologically as well as preserving the past. He had a personal motorcycle which he used for traveling about the Golden City.[4]

In 1941, at the height of World War II, Captain America traveled to Wakanda and encountered Black Panther, the King Azzuri and his son T'Chaka. They worked together with Nick Fury and his Howling Commandos in combat against Baron Strucker and the Red Skull. [3] They then forced to fight against the Nazi's super soldiers the Master Man, Warrior Woman, and the Armless Tiger Man in an all out invasion of Wakanda. Cap squared off with Master Man. Warrior Woman dropped from the sky straddling a Nazi Bomb. She was engaged by the Black Panther who run his plane into her. Meanwhile, Tiger-Man attacked T'Chaka and S'Yan. He quickly subdued T'Chaka and promised to kill him if Wakanda did not surrender.[5] Outmanned and outgunned, Captain America and the Black Panther battle Master Man, Warrior Woman, White Gorilla and the Red Skull. Meanwhile, Gabe Jones had to make a fateful choice: betray the U.S. government or the people of Wakanda.[6]

Cap later returned to Wakanda intrigued about the new Vibranium rumored to be found in the region. Cap eventually earned T'Chaka's trust and respect. As such, the Wakandan king gave Cap a piece of Vibranium. In return Cap gave T'Chaka his triangular shield as a token of his trust.[7]

T'Chaka was kidnapped in the Fall of 1959 by Geoffrey Sydenham and his organization, ICON.[8] This was done in an attempt to weaken the African nation and make it easier for his operatives to pillage the country of its advanced technology.[9] This plot failed, however, as Nick Fury's Avengers defeated ICON's invading force before capturing Sydenham. The U.S. State Department then learned of T'Chaka's whereabouts in exchange for granting Sydenham his freedom. T'Chaka was being held in a castle in Latveria, where he was picked up by Eric Koenig and Dum-Dum Dugan before being safely returned to Wakanda.[10]

T'Chaka adopted an infant white child who survived a plane crash that killed his parents. He made the boy his ward so he would be protected in the sometimes xenophobic nation of Wakanda, and named him Hunter. T'Chaka's interest in advancing Wakanda technologically came in part from his first wife N'Yami. N'Yami was orphaned in the tribal conflicts of the day, and left Wakanda to learn in the outside world. When she returned home, she brought new scientific ideas about the use of Vibranium to the country. T'Chaka and N'Yami were married, but her work and reluctance to bear children kept the royal couple from having an heir for many years. Still, she took on the role of mother for Hunter, caring for him as if he were her own.[4]

The day came when Baron Strucker of Hydra attempted to infiltrate Wakanda. T'Chaka was on the front lines defending his country with technology conceived by his pregnant wife. Although the invaders were driven off, N'Yami grew ill in her pregnancy. Young T'Challa was born, but N'Yami did not long survive his birth.[4] King T'Chaka would not truly love again for some time, having dalliances with courtesans and throwing himself into his work. One of these dalliances was with a member of Wakanda's spy network, producing a son named Jakarra. A boy of illegitimate yet royal blood, Jakarra was raised away from the Golden City after his mother's death.[11] Still, he loved the prince and was proud of his heir. When five-year-old prince T'Challa went missing in the woods under the supervision of the Dora Milaje, a furious T'Chaka disbanded their order for their failure. On walkabout, T'Chaka was found by a South African woman named Ramonda. A grateful T'Chaka invited Ramonda back to the Golden City and soon began to love again. King T'Chaka and Ramonda, who would become his second wife, eventually conceived his first and only daughter Shuri.[4]

The time came when the great king fell. Ulysses S. Klaue (renamed Klaw) was a Dutch scientist who coveted the Vibranium resources of Wakanda. His ancestor, Klaue, tried to assault Wakanda in the 19th century and failed, but Klaw received intel from Strucker and Hydra guiding him to Wakanda's walls. Backed up by mercenaries and his own sonic technology, Klaw approached the country. After T'Chaka refused to yield the rights to mine Vibranium, Klaw's forces opened fire. When T'Chaka was overpowered by Klaw's sonic blaster, T'Challa ran to his aid. Klaw prepared to kill the young prince instead, but T'Chaka shielded him and died. Klaw was disarmed by the mighty warrior Zuri and young prince T'Challa used Klaw's own sonic blaster to shatter his right arm, forcing him to retreat his troops.[4] Upon T'Chaka's death, his brother S'yan ruled in his steed until his son T’Challa was old enough to take the throne. It took many years before his son could get revenge on his father's killer.[12]

Heart-Shaped Herb: As chieftain, T'Chaka was formerly entitled as the Black Panther and ate the heart-shaped herb to granted him superhumanly acute senses and enhanced his natural strength, speed, stamina, and agility to peak human potential.

Superhumanly Acute Senses: T'Chaka can see in total darkness as if it was a clear sunny day, something at over a few hundred feet appears as though it is right in front of his face. T'Chaka's sense of hearing is enhanced in a similar manner, enabling him to hear sounds that an ordinary human can't and to be able to hear sounds that an ordinary human can, but at much greater distances. T'Chaka can memorize tens of thousands of scents and track them to the exact location, can smell fear, and detect if someone is lying by change in body odor. T'Chaka's sense of taste is sensitive to the point that he is able to taste the exact ingredients of any particular food he is eating.


Peak Human Strength: T'Chaka's physical strength was considerably much stronger than average humans. At his full potential of his strength, he was able lift close to 800 lbs.

Peak Human Speed: T'Chaka is able to run and move at speeds superior to those of any Olympic athlete. He is capable of reaching speeds of 35 mph.


Peak Human Stamina: T'Chaka's musculature generates less fatigue toxins than the bodies of most humans. He can exert himself at peak capacity for up to one hour before fatigue begins to impair him.


Peak Human Durability: T'Challa's skin, bone, and muscles are augmented to levels that are harder and stronger than normal humans. His body was able to heal injuries that would prove lethal to ordinary humans by regenerating cells to a limited extent.


Peak Human Agility: T'Chaka's agility, balance, and bodily coordination are heightened to the pinnacle of human development. He was superior to any Olympic level gymnast that has ever competed.

His strength is almost superhuman, Black Panther has demonstrated exceptional feats of strength like wrestling down a Rhino, knocking out a Polar Bear and even stopping a Elephant's charge. He's classed at the peak of human potential. Marvel handbooks class him strong enough to lift 750 lbs.

In spite of his enhancements, T'Chaka is still an ordinary human being. He is susceptible to some of the same vulnerabilities other normal humans are. Due to his heightened senses, bright lights, loud noises, & strong smells can potentially overwhelm him.

Like this? Let us know!
Retrieved from "https://marvel.fandom.com/wiki/T%27Chaka_(Earth-616)?oldid=5741153"
Community content is available under CC-BY-SA unless otherwise noted.