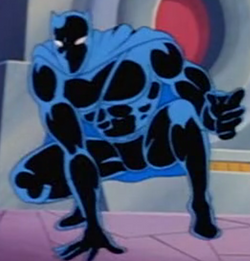 From this moment father, I live only to avenge this evil deed... I shall be as strong... and as fearless... as the sacred Black Panther. You have slayed my father!

T'Challa was brought up in Wakanda by his father, T'Chaka, who also ruled the nation.

One day, a scientist called Ulysses Klaw, the so-called "master of sound", arrived with a group of men, ordering for T'Chaka to give him some of the precious eternal rock. T'Chaka refused, and ordered Klaw to leave.

Klaw had been called mad for years, and began to explain his plan to T'Chaka. The vibranium was the key to completing his sound transformer which would allow him to transform pure sound into any living form he desired. T'Chaka refused, and ordered him to leave, prompting Klaw to steal it.

Klaw shot T'Chaka, and T'Challa heard the gunshot. He screamed for his father, angry with what had happened. The guard tried to prevent T'Challa from going into the battle, and raced off to fight Klaw. The Wakandan warriors were getting knocked down too easily by the sound transformer.

As Klaw's allies raced into the village, T'Challa went to assist his father, laying on the floor dead. Tears streamed down his face. From then on, T'Challa lived only to avenge this evil deed. He would be as strong and as fearless as the sacred Black Panther.

Meanwhile, Klaw set the nearby village on fire, and tried to claim the vibranium. The madness enabled T'Challa to sneak up behind a mad Klaw, and grab his weapon. He shot Klaw's hand, and Klaw fled the scene, promising to return. If T'Challa could control the weapon, Klaw would not have got away.

T'Challa was now the new chieftain of Wakanda. He had to prepare for the eventual return of Klaw. Through his adolescence, T'Challa would sell small bits of his vibranium wisely, amassing a fortune. This enabled him to enable the finest schools.

Using T'Challa's knowledge of advanced physics, he designed complex inventions to test his skill. He trained and trained for his test... fight the Fantastic Four. After several attempts, T'Challa beat the F4. Or so he thought. While he fought Thing and Invisible Woman, Mr Fantastic found and freed Human Torch, who freed the others. They then battled T'Challa and imprisoned him in a force-field. He over-estimated himself, and under-estimated his foes.

He then revealed himself to the Fantastic Four, showed them his village and told his story to them. Then Klaw returned.

The Return Of Klaw

The Black Panther headed off to find and kill Klaw alone, despite the Fantastic 4 offering to help. He approached a cave with Klaw in - which turned out to be a trap! Klaw used his new invention to attack the Black Panther, even creating a panther to attack him! Then Mr Fantastic arrived, and reflected Klaw's blast against him, sending him into his machine, and killing him.

T'Challa then stood with his new friends the Fantastic Four and began his speech. However, the noise of an eagle was heard, and a giant eagle appeared, one of Klaw's creations, carrying Klaw, now living solidified sound. Despite the Fantastic Four's attacks, Klaw still overcame them. He created more creations, almost destroying the village.

When the Invisible Woman saved the village, it was revealed the Wakandan armbands (made of pure vibranium) she was wearing could destroy any of Klaw's inventions. Mr Fantastic gave them to T'Challa, who absorbed his power and shrunk Klaw down to nothing.

T'Challa's mission was over. T'Challa attempted to rest and send the Panther's monument underground, but was talked out of it by Invisible Woman in order to protect his village. He let the panther stand tall, and was ready to stalk again![1]

Seemingly those of Black Panther of Earth-616.

Seemingly those of Black Panther of Earth-616.

Like this? Let us know!
Retrieved from "https://marvel.fandom.com/wiki/T%27Challa_(Earth-534834)?oldid=5590931"
Community content is available under CC-BY-SA unless otherwise noted.