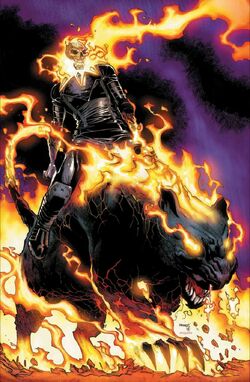 After gaining the power of the Infinity Stones, Gamora sealed the souls of the universe within the Soul Gem. In order to incapacitate its inhabitants, she additionally folded the universe in half, merging every soul with another. This course of action accidentally resulted in the creation of Warp World, a pocket dimension where history was rewritten and adapted to the fused beings. Inside Warp World, Black Panther and Ghost Rider were merged together into Ghost Panther.[1]

Some years prior in this world, the arrogant Wakandan prince T'Challa was exiled from the secluded nation by his father T'Chaka. In America, he was taken under the wing of showman Jericho Simpson. Using the stage name Johnny Blaze, T'Challa became a successful stunt rider. Five years later, T'Challa suffered a fatal accident during a stunt. An accomplished mystic, Jericho invoked the demonic entity Zarathos to return T'Challa to life. Zarathos sensed a hunter's soul within T'Challa and offered him great power in exchange that T'Challa hunted the souls of the wicked for her. T'Challa refused, arguing that the price of the bargain was too high. Before T'Challa returned to life, Zarathos told him that his father had died.

T'Challa visited Wakanda to pay his respects and see his sister Shuriri crowned, but decided to hunt down T'Chaka's killers after learning that he had been murdered. Additionally, during the attack, the killers destroyed the garden of the Heart-Shaped Herb, putting an end to the legacy of the Black Panther. Zarathos tempted T'Challa, granting him enough power to track down the murders, the time-travelling Freemen. T'Challa was overpowered by M'Bakshulla the White, but agreed to Zarathos' offer before M'Bakshilla could kill him. Becoming the Ghost Panther, T'Challa consumed M'Bakshulla's soul. He immediately snapped out of his thirst for souls and rejected Zarathos' power, and was struck from behind by Erik Killraven.[2]

In the afterlife, Zarathos convinced T'Challa to take up her offer again in order to protect the kingdom, and Shuriri, from Killraven. Ghost Panther rushed to Wakanda and intercepted Killraven, who intended to set off bombs to debilitate Wakanda for when the Martian Masters came to invade so the secluded nation could not stand against the invasion unlike it happened in Killraven's timeline. Decades of experience gave the assassin the upper hand, so in the afterlife T'Chaka convinced Zarathos to accept his service and was returned to life in the form of a demonic panther. With T'Chaka's help, Ghost Panther defeated Killraven and consumed his soul. T'Challa took the throne of Wakanda afterwards.[3]

Some time later, when the monstrous Devondra began to consume Warp World, countless scaled-down manifestations of Devondra started appearing all over the world. Ghost Panther was reached by Emma Frost's worldwide telepathic rally to fight Devondra's main form in the confines of Warp World.[4] Following Gamora's defeat, Adam Warlock and his allies restored the universe to normalcy. However, they made it so Warp World continued existing within a facet of the Soul Gem, so the new life forms that resulted from its creation wouldn't cease to exist.[5]

Like this? Let us know!
Retrieved from "https://marvel.fandom.com/wiki/T%27Challa_(Warp_World)_(Earth-616)?oldid=5612535"
Community content is available under CC-BY-SA unless otherwise noted.