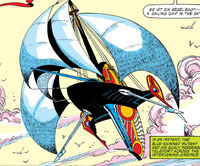 Origin
The T'ai Javinee operated in the skies above an unnamed planet in an unidentified reality alternate to that of Earth.
First appearance
Nightcrawler #1
(November, 1985)

Retrieved from "https://marvel.fandom.com/wiki/T%27ai_Javinee?oldid=5578778"
Community content is available under CC-BY-SA unless otherwise noted.