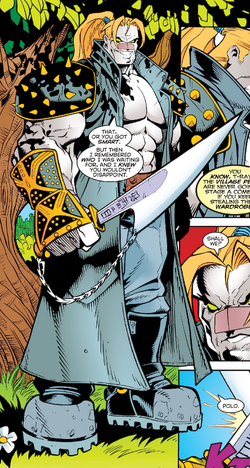 As per his own account (subject to hear-say), he met his future wife, Mercedes, whilst attending college at Calgary, marrying her once they had both obtained teaching degrees. Whilst vacationing in Maine, he found a youth called Jack (the man who would later become Deadpool), who was on the run from his employers. After taking him back to the cabin, Jack revealed that he was going to steal the identity of 'Wade Wilson' to avoid his employers finding him, instead leaving them with T-Ray's body.

T-Ray survived 'Jack's' assault, though Mercedes did not. T-Ray lived long enough for 'Jack's' former employers to reach the house, where he requested that they teach him how to be like the youth, so he could kill 'Jack'. Though he later killed these employers.

In Japan, T-Ray became an accomplished sorcerer, transforming into a more muscular albino form and allegedly trading his soul to beings he called "Dark Masters". As he honed his skills as an assassin, he offered the souls of his victims to these masters.

When T-Ray learned of where Deadpool received his assignments from, Hellhouse, he began to frequent there himself, seeking revenge - but choosing to play a long game. Deadpool, somehow recognizing T-Ray as Wilson, believed the opposite of T-Ray's story - having taken the identity of 'Wade Wilson'. Thus they became rivals, competing for jobs and for 'Top Dog' status in Hellhouse. One instance saw T-Ray set fire to Deadpool's mask, making him knock Typhoid Mary out of a window - thus sundering a bond between the two.

T-Ray later resurrected Mercedes Wilson and hired the mercenary Bullseye to place her in jeopardy, whilst Deadpool had been hired to go on a mission where he would encounter her. Believing her to be his own wife, Deadpool protected her and started to gain hope and begun planning to rebuild their life together. T-Ray took pleasure in revealing what 'really' happened - of their true roles in her death. T-Ray transformed Mercedes to an albino form, much like his, then ghost-forms of Deadpool's many victims, to further crush his enemy's spirit. This failed, though, and after a fight with Deadpool, eventually departed with Mercedes to continue their life together.

After Deadpool's death, Thanos (or one of his doppelgangers) hired T-Ray to resurrect Deadpool via the Gemini Star - which created several entities calling themselves Deadpool from aspects of his psyche. One of the people aiding Deadpool in investigating these 'new' Deadpools disrupted the Gemini Star when they confronted T-Ray, sending the aspects into T-Ray and mentally overwhelming him.

After Agent X was sent on a mission to retrieve a morphogenic actuator from Hydra, Agency X was attacked and Outlaw along with Sandi Brandenberg were captured. The attacker was T-Ray, wanting revenge against Deadpool and Agent X for stealing his identity. Deadpool confronted T-Ray, but was knocked unconscious from behind. After T-Ray tried to make Wade doubt his identity, Wade broke his bonds, and started beating T-Ray. Wade seemed the victor, but T-Ray used his black magics and gained the edge. After impaling Wade with a magic blade, T-Ray gave Wade an ultimatum, flee and save himself, at the cost of Outlaw and Sandi's lives, or keep fighting risking his own death (because the magic blade nullified his healing factor), but saving the girls. After contemplating for hardly a second, Wade killed T-Ray with a katana to the head.

After Cable's apparent sacrifice to keep the Marauders from stealing future tech, Deadpool was hired by Dr. Strange to uncover a strange universe threatening anomaly. This anomaly turned out to be the Katana Wade used to kill T-Ray, as the black magics were absorbed into the blade. Wade was forced to resurrect his arch-nemesis, in order to save the universe. After a long bout (with a giant T-Ray) Wade prevailed, and T-Ray left on his own nefarious deeds. Only time will tell if T-Ray will return...

Can manipulate mystic energy through hieroglyphic scraps of paper for the following:

Various, including; Axes, swords, shuriken and others.

Like this? Let us know!
Retrieved from "https://marvel.fandom.com/wiki/T-Ray_(Earth-616)?oldid=6477927"
Community content is available under CC-BY-SA unless otherwise noted.