The planet Taa, home planet to Galan during the Sixth Cosmos, a space explorer who would one day become Galactus, was a paradise-like world whose civilization is said to have been the most advanced of any of the known universe of that time.[1]

However, this universe was in its final stages of collapse. Originally, like all universes in the Marvel Comics continuum, this universe had been a "Cosmic Egg" — a primal sphere of disorganized, dense, compact primordial matter. The sphere underwent a "Big Bang," an explosion that hurled the matter outwards, where much of it eventually condensed into stars and planets. This universe expanded in size for billions of years, and then contracted, undergoing a "crunch" over the following billions of years. All of the matter of that universe was plunging towards a central point, where it was collapsing into a new "Cosmic Egg."

Taa's civilization was one of the last still in existence. Lethal radiation caused by the "Big Crunch" this universe was experiencing was wiping out all life across the universe. Galan, a space explorer, was dispatched to travel through the cosmos to find a means of saving Taa, but he found none. The radiation eventually killed off all but a tiny fraction of the population of Taa. Knowing their deaths were inevitable, Galan proposed to the remaining survivors that they die gloriously by piloting one of their starships directly into the heart of the "Cosmic Egg." As the starship containing Galan and his fellow survivors approached the focal point of the Big Crunch, the heat and radiation killed all the passengers except Galan, who was transformed by the sentience of that universe into the World-Devourer Galactus.[2] 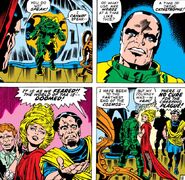 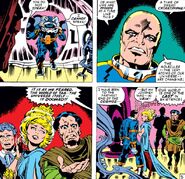