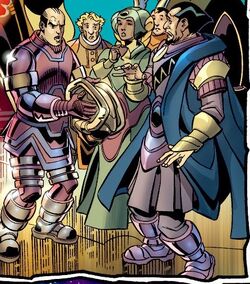 The Taa-ans are a race of humanoids that lived on the planet Taa.[4]

The Taa-ans were the inhabitants of the planet Taa. They were a people of sciences and arts; however, facing the radiation plague unleashed by the machinations of the Dweller-in-Darkness on the M'kraan Crystal, the Taa-ans were decimated. Galan and Taa-an scientists decided to approach the epicenter of the universal decay, the Cosmic Egg. While the others eventually died, Galan was greeted welcome by Eternity, the Sentience of the Universe, and entered the Cosmic Egg, emerging later as the world-devourer Galactus.[1]

Many of the Taa-ans had silvered eye-patchs on the right eye; Facial tattoos[3]

Like this? Let us know!
Retrieved from "https://marvel.fandom.com/wiki/Taa-ans?oldid=5676514"
Community content is available under CC-BY-SA unless otherwise noted.