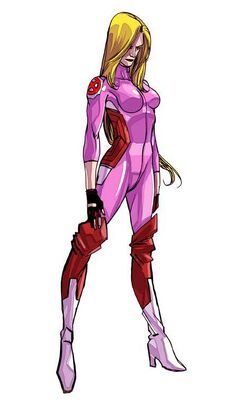 Bombshell was among her fellow X-Men teammates who were playing a game of baseball when Genosha's Press Gang attacked them in order to kidnap their healer Triage.[1]

During the battle, Tabitha was throwing her plasma time bombs at the Press Gang when her former lover Rictor grabbed her by the arm to try to reason with her but to no avail.

She was knocked out by Rictor's shockwave wave so she wouldn't get injured in the fight. Bombshell was taken captive and brought back to Genosha by the Press Gang after they escaped via Tempus's temporal abilities.[2]

Tabitha was being held in a cell adjoining to Wolverine and Graymalkin while they were being watched over by Rictor. Her imprisonment didn't last long as Baron Grey arrived in Hammer Bay with a group of X-Men to rescue them. Longshot lowered the force fields surrounding their cells after he fought Rictor and briefly made him unconscious when he threw paralytic blades at him.

Bombshell and the others transversed through the lower levels when they came upon the lab of Genegineer Kluge who had resurrected the deceased Cameron Hodge from material used from former New Mutant, Warlock.[3]

Tabitha generated a massive build up of plasma energy from her hands and blasted it at Hodge after he ensnared her in his tentacle hand. The blast only did minimal damage but enough to wake up the unconscious Rictor who was horrified seeing a revived Hodge getting ready to kill her. He began vibrating the debris around Hodge ripping a hole in the ground but Hodge extended out his multiple tentacles to keep himself afloat. As Bombshell yelled to Rictor, it jogged Hodge's memory of Ric dropping a building on him. He returned the favor by killing him with a tendril straight into his head.

Tabitha became disillusioned by what just happened and just started firing shots at Hodge. Soon enough they devised a plan, Bombshell along with Wolfsbane and Havok had Rogue lift them up to the Blackbird so they could fly it straight into Hodge as Bombshell and Havok used their combined powers to create a huge explosion killing Hodge once more.[4]

Seemingly those of the Tabitha Smith of Earth-616.

Seemingly those of the Tabitha Smith of Earth-616.

Like this? Let us know!
Retrieved from "https://marvel.fandom.com/wiki/Tabitha_Smith_(Earth-24201)?oldid=5679621"
Community content is available under CC-BY-SA unless otherwise noted.