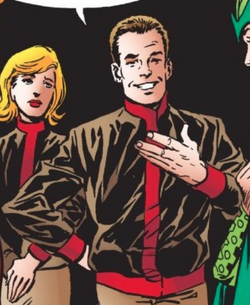 Tad Carter discovered his power to move objects telekinetically at the age of 12. A few years later he read his teachers mind; this was the first time he realized he had a second power. His powers continued to develop. When he was in college, not understanding what he was, he believed he could teach others to use the same abilities he had. After telling several other boys about his ability to read minds they attacked him, calling him a mutant. When they approached him he telekinetically pushed them away. He was at this point levitated by an unknown mutant who telepathically spoke to him. He was flown away by this mutant and told that he must wait with them in hiding until mankind is ready for them.[1]

Tad's rescuer was later revealed to be named Tobias Messenger, who had founded a group of mutants called the Promise. Along with the other members of the Promise, Carter slept in suspended animation for ten years at a time, emerging for a few weeks each decade to seek out new members. They planned to wait until mutants and humans went to war, which they saw as inevitable, and then provide guidance to the mutants who they believed would be victorious.[2]

Tad Carter first appeared in July 1962 in Amazing Adult Fantasy #14, predating X-Men #1 (September of 1963) and the eponymous team as the first modern mutant.

Like this? Let us know!
Retrieved from "https://marvel.fandom.com/wiki/Tad_Carter_(Earth-616)?oldid=5362481"
Community content is available under CC-BY-SA unless otherwise noted.