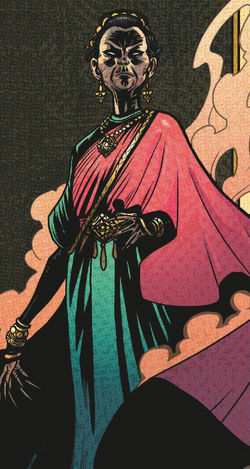 Centuries ago, Tai's ancestors settled in Cambodia around an interdimensional breach called the Well of All Things. Calling themselves the Cult of the Dragon's Breath, they plotted to one day rule the world. Through centuries of selective breeding, their plan began to bear fruit with Tai's generation. Tai and the fellow members of the cult that were born in her generation were able to tap into the powers of the well.

Tai's people prophesied that in order for their plan for world conquest to come true, the members of the cult would eventually need to marry westerners, and that these children would become the eventual rulers of the world. Only through the merging of east and west could the prophecy come true. Tai, ever the opportunist, did not want to share the power with anyone. Over time she murdered the majority of her cult with the exception of her daughter Miyami and 5 other brides of the Dragon's Breath Cult and she waited for the prophecy to be fulfilled.

Eventually, Tai's patience was rewarded during the Siancong War. An American unit of soldiers called the Half-Fulls found the temple of the Dragon's Breath Cult during a walk through the jungle of Cambodia. The group attacked Tai until they were restrained by her magic. Tai made the six soldiers a pact: marry the six brides of the Dragon's Breath Cult and they would be the fathers to the eventual rulers of the world.

Daryl's refusal to participate in the pact is what ultimately led to his and Melody's murder at the hands of Andrew Chord. After Miyami faked the deaths of herself and her two children Chord wandered the world as a mercenary eventually reuniting with his mother-in-law Tai. Tai, fearful that the pact would come undone by the lack of participation of its members, came with Chord to America. Tai had Andrew Chord reconnect with his old war buddy Daryl Taylor. Daryl and Melody's son Dwayne Taylor in many ways became a replacement for the son Chord had lost. Tai eventually ordered Chord to kill Daryl and Melody which he did. At this point, Dwayne Taylor was introduced to Tai and she used her mental powers to cloud his memory of what happened to his parents.

Some time later Dwayne Taylor decided to build himself a suit of armor, took the codename Night Thrasher, and began gathering a group of super humans to help him in his war against crime. Tai and Chord were often helpful to the group. Tai herself took on a team of Hellions before being subdued by the White Queen. Tai's granddaughter Silhouette was the first member to join the team after the six founders.

Eventually, Night Thrasher and Silhouette began to uncover Chord and Tai's mismanagement of the Taylor Foundation and discovered that the Foundation's money was supporting various questionable recipients such as Justin Hammer, Roxxon, Genetech, Arnim Zola and AIM. When confronted, Chord attempted suicide by shooting himself in the head. Tai eventually used her magic to heal him as best she could.

Later, when Chord was in the hospital, he was visited by his wife Miyami. Tai later tracked Miyami to a Chinese restaurant and when Miyami admitted her son and daughter were still alive and that she faked their deaths to keep them from Tai, Tai then realized that Silhouette and Midnight's Fire were her grandchildren when Miyami mentioned the children grew up in China Town. Enraged she murdered Miyami and later attempted to kill Silhouette.

Tai returned to Cambodia and was confronted by the Folding Circle. Diego Casseas, now calling himself the Left Hand, had gathered together the children of the Half Fulls (except Silhouette) in order to defeat Tai and claim the Well of All Things for themselves. Eventually, the New Warriors arrived and after a battle, Tai revealed that the original reason she manipulated Dwayne into forming the New Warriors was to sacrifice super humans to the well. If the children of the pact had entered the well they would have gained omnipotence but Tai reasoned that sacrificing other superhumans would fulfill the prophecy while she used the children of the pact as her "avatars of world domination. Eventually, Tai tried to kill both groups but was killed by Night Thrasher who shot her in the back. Nova saved Night Thrasher from falling into the well and left Tai and the Left Hand to be consumed.

Zarrko the Tommorow Man later sends the members of the New Warriors back in time to change the moments in their life they most wanted to undo. Silhouette is sent back to the moment where her mother Miyami is murdered by Tai. Night Thrasher similarly is sent back to stop Silhouette's father Chord from killing his parents per Tai's wishes. Darkhawk defeats Zarrko before any of the Warriors can act and change the past.

Like this? Let us know!
Retrieved from "https://marvel.fandom.com/wiki/Tai_(Well_of_All_Things)_(Earth-616)?oldid=5470930"
Community content is available under CC-BY-SA unless otherwise noted.