2. "The Army of Assassins Strikes!"

What cruel trick of fate is this?? I'm one of the strongest, most powerful, most feared humans on the face of the Earth! There is nothing I cannot accomplish... Nothing I would not dare! And yet, I haven't the courage to remove my iron armor... I don't dare gamble with my damaged heart! I'm a prisoner of Iron Man... Of my own creation!!

Appearing in "Suspected of Murder!"

Synopsis for "Suspected of Murder!"

After his fight against the Black Knight, Tony Stark wakes up from a nightmare, and remembers that he can't take his armor off, because he requires the extra power from its belt pods to keep his heart beating. Meanwhile, his employees Pepper Potts and Happy Hogan desperately search for their boss all over the city to no avail, so they return to Stark Industries, in case Iron Man has news of Stark.

When they question Iron Man, Tony realizes he can't tell them he is on vacation, because they would search for him in his haunts. He claims that Tony is on a secret business matter that even he doesn't know of. Happy is suspicious and confronts Iron Man, threatening the Avenger.

Back in his office, Stark writes a note to calm their fears, and signs it. While Iron Man is removing cash from the safe, Happy and Pepper enter the office, accompanied by the police. Pointing out that the safe has not been forced open, Iron Man turns over the note. The police examine the note and find the handwriting oddly shaky; they also notice an absence of fingerprints (both because Stark was wearing his armored gloves when writing it). As Iron Man, Tony claims that he's tired of the questioning and flees through the window. The officers try to shoot him down, but the inspector reminds them that they still have no clear proof that Iron Man did anything wrong. Iron Man calls the Avengers to request absence from a meeting, and Thor grants him his request, but not before asking his teammate if he has done anything.

Meanwhile, in her luxurious mansion, the Black Widow takes advantage of Stark's disappearance and Iron Man's escape from Stark Industries to send Hawkeye to steal the plans for Stark's newest weapon. The archer reluctantly agrees and breaks into the factory. When he reaches the door to Stark's office, he's spotted by a police officer. Hawkeye escapes into the room and takes Pepper hostage, forcing her to lead him to Stark's lab. Once in the lab, Hawkeye finds himself surrounded by machines he doesn't understand, and no papers or plans at all. Pepper reveals that Stark keeps all of his secret formulas in his head.

Hawkeye tries to force Pepper to use a communicator to call for a escape vehicle, but she refuses. The communicator was on nevertheless, and Happy and the police overhear the discussion in Stark's lab. The Avengers, informed of the events unfolding at Stark Industries, call Iron Man and ask him if he wants them to take care of Hawkeye. Iron Man decides to go alone, because the presence of all of the Avengers might lead him to hurt Pepper.

The Black Widow decides to go to Stark Industries to help her lover, but as soon as she leaves the house, she's captured by Sergi Amkov, the head of the iron curtain spy system in America. Back at Stark Industries, Iron Man easily dodges Hawkeye's arrows, and creates distance between the villain and his hostage. Hawkeye breaks a pair of chains holding an expensive rocket, forcing Iron Man to grab it. He tries to trap the Golden Avenger with an arrow equipped with a steel cable, but Iron Man snares the cable before it can entwine him and pulls it, knocking down Hawkeye. The archer escapes to the rooftop by launching a blinding-flash arrow at Iron Man.

On the roof, Hawkeye launches an arrow with a rope at a plane taking off from LaGuardia Airport, and uses it to carry him across the river. Unbeknownst to him, the plane holds Black Widow and her abductors. The police soon arrive at Stark's lab, but Pepper convinces them not to use their anti-armor guns on Iron Man, pointing out he hasn't been found guilty of any crime. As Iron Man leaves, Pepper claims that while the evidence points at him, she finds something about Iron Man that makes her want to trust him.

Appearing in "The Army of Assassins Strikes!"

Synopsis for "The Army of Assassins Strikes!"

Go now, my army of assassins! You must not fail, or else you shall uncur the wrath of--Zemo!

In South America, Baron Zemo has his newly gathered Army of Assassins fight a fake Captain America for one final test before sending them to battle against the real one.

While in the United States, Captain America and Rick Jones are on site for Cap to put on a private exhibition of Cap's athletic prowess to encourage young people to be physically fit. Although they planned a mock battle, the actors helping Cap have been replaced by the Baron's Army of Assassins who attack Cap.

With the help of Rick Jones, Cap manages to fight off the Army of Assassins. Later, Baron Zemo checks in with his video screen to see if his Assassin's have defeated Cap. But as soon as he turns his TV on, he sees Cap telling Zemo that Zemo has failed and that he's a coward for not battling him face-to-face. Angered by Cap's taunts, Zemo blasts the screen. With the Assassins taken away by the authorities, Cap vows to Rick that he will someday stop Baron Zemo. 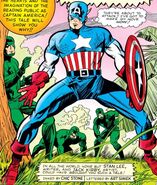