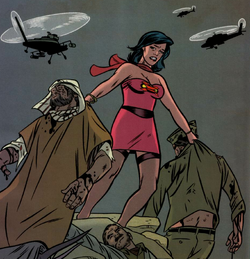 The Taliban were an Islamic extremist militant group in Afghanistan.

In 1996, the Taliban came to power in Afghanistan, and achieve global notoriety by harboring and hiding Osama bin Laden, architect of the September 11th, 2001 terrorist attacks.

Their government was overthrown and a democracy installed, but the country remained occupied by NATO peacekeeping forces as the Taliban's presence remained.[1]

Like this? Let us know!
Retrieved from "https://marvel.fandom.com/wiki/Taliban_(Earth-616)?oldid=5551621"
Community content is available under CC-BY-SA unless otherwise noted.