Back to page
View source

The title of the infobox corresponds to the current alias of the character. Thor Odinson currently goes by "Odinson," he abdicated using the name "Thor."
--The ADour-incible ADour (talk) 20:28, May 20, 2016 (UTC)

Layout Guide states that: "infoboxes are inspired by Marvel handbooks and it should be taken into account when deciding the fields infobox contains." I don't believe that Thor's entry will be named as Odinson for a long time. —Mrkermit (talk) 21:15, May 20, 2016 (UTC)

As ADour said, there's no question he abdicated the title of "Thor"; however, I don't believe that one's own name is an Alias per se, so would contend the proper coding would be the Title of "Odinson" here, rather than Current Alias being "Odinson", but either way, the infobox heading should display "Odinson", not "Thor". -- Annabell (talk) 21:22, May 20, 2016 (UTC)

To clarify, I agree with what Annabell said. I hadn't noticed "Odinson" was being listed as an actual alias, I had only focused on the part about it being used as the title in the infobox.

I don't understand the mention of the layout guideline. Thor's last proper profile update happened in 2012, so he still has to have a profile which lists him as "Odinson." If that's the argument why we shouldn't list the title as "Odinson," it's like saying that we shouldn't change the profile title of pages of characters that go with a different name until they get a handbook profile update. Which I don't think makes much sense.
--The ADour-incible ADour (talk) 21:40, May 20, 2016 (UTC)

"Thor" is not and never was a title, it's his name. And after the Odinson phase he was known as Thorr when he was using an alternate universe Mjolnir. But he asked to be called Odinson because he wasn't worthy. Seeing as how he IS worthy again, there is no reason to not call him Thor, in story or out. Rhyvurg

So when he was born his parents named him a title instead of a name? No. Just...no. It makes no sense, and treating it like a title just illustrates how badly they're handling Jane Foster. Rhyvurg

Seeing that he's worthy don't help without a reference for the use of name. It seems that Thor is both name and title (gods have strange customs). And character's title is not the same as title of infobox. —Mrkermit (talk) 09:35, May 21, 2016 (UTC)

It's clear that we have different opinions should we use best known or latest name in the infobox title. If we choose to use latest name, current alias field will become redundant as it's always printed as title. I'll start a new discussion on Marvel Database talk:Article Guidelines to decide what should be used for every character. —Mrkermit (talk) 09:35, May 21, 2016 (UTC)

Layout guide is now updated and consensus was to use current name as a title. Therefore I changed title to Odinson. —Mrkermit (talk) 21:17, May 23, 2016 (UTC)

The age claims thor is multi planetary level. But he is not an example given is lifting the midgard serpent its even shown in a picture. It was in ether real form. The neutron star thing is a odd example and probably an example of the writer not knowing the extent of the feat they are writing. Thor needed Beta Ray Bills help to lift Asgard. An [ht] there are other examples of thor being much weaker than planetary lw[

There are also examples of much higher than multi-planetary level strength, such as during Walter Simonson's run on the book, when he destroyed Surtur's dimensional portal, which appeared to be the size of a solar system. Antvasima (talk) 10:15, June 16, 2016 (UTC)

Thor and Bill threw their hammers and destroyed it..and It has been said in the series repeatedly that Mjolnir has the power to destroy worlds. In Simonsons Thor run thor was buried in a avalanche of snow and needed to be saved, Herculese portrayed as thors equal or superior (by some writers) in strengths needed help to push over the Surtur portal on earth and it while huge was building size, During his battle with Fafnir a collapsing building is treated as a threat to him, as was lava. Siminson wrote a pretty mellow powered thor compared to what many people think of him at.

I dont doubt that some writers treat him as planetary in less than explicit terms most the time. But 99 percent of the time he is treated as much much lower than that. The article should not reflect only the most extreme examples. It would be like a superman wiki basing his stuff on odd showings like that time venom worked him over in unlimited access.

And even if other feats were this page still misrepresents several jormungand was in etherreal form, pushing the world tree did not move the 9 realms it brought time to them thats it. If nothing else these two entries need to be corrected. They are misquoted like crazy. MacDonaldthethird (talk)

The article currently states that Mjolnir’s worthiness enchantment was changed upon its restoration in WotR #6 to allow Thor to wield it despite being unworthy. However, it’s been made pretty clear between that issue, Avengers #21 and Thor #15 that he is worthy again, having realised that worthiness comes from the constant struggle to be worthy. I’ve changed this on the Mjolnir page but can’t on this page because it’s locked. R. New Beta (talk) 00:19, July 18, 2019 (UTC)

Error in War of the Realms #5 description.

This is what the description of Thor's actions during War of the Realms #5 should be saying:

After helping strike down the Dark Council's forces all over the world, Thor learned that his parents were alive and were being held captive by Malekith at Stonehenge, which Malekith surrounded with a magic barrier that only Thor could pass through; if anyone else passed through the barrier, Odin and Frigga would die. Thor subsequently nailed himself to a part of Yggdrasil that was growing from the Sun with his ax Jarnbjorn and the assistance of Daredevil to learn how to defeat Malekith.

As it is written currently, the order of events is mixed up, claiming that Thor went to Yggdrasil before learning of Malekith's challenge. I also need to dispel the implication that Thor nailed himself to the World Tree on his own. Thor's page is locked right now, so I can't make the changes myself. — NES Boy (talk) 19:48, August 20, 2019 (UTC)

Hey, guys. I remember about a year ago, that Thor had the ability Indomitable Will noted down on the abilities section of his page and rightly so, I believe. Now, however, it has been replaced with Telepathy Immunity, which suggests that he does not have an Indomitable Will, despite the multiple feats recorded there. Moreover, Tana Nile, a Rigellian, tried to subjugate Thor's will with her telepathy but he proved to be too strong against her mental domination, which prompted her to describe his will as "dauntless" and the other Rigellian remarked that Thor is the only individual since the dawn of time to have successfully overcome their mind thrust. Thus, it can be posited that Thor does, indeed, have an Indomitable Will, along with Captain America. What are your thoughts? Shouldn't it be changed?Mite-Man16 (talk) 17:34, October 6, 2019 (UTC)

The source of Thor's quote on the page comes from Captain Marvel Vol. 3 #17

It looks bad, he looks like a hobo with missing teeth. 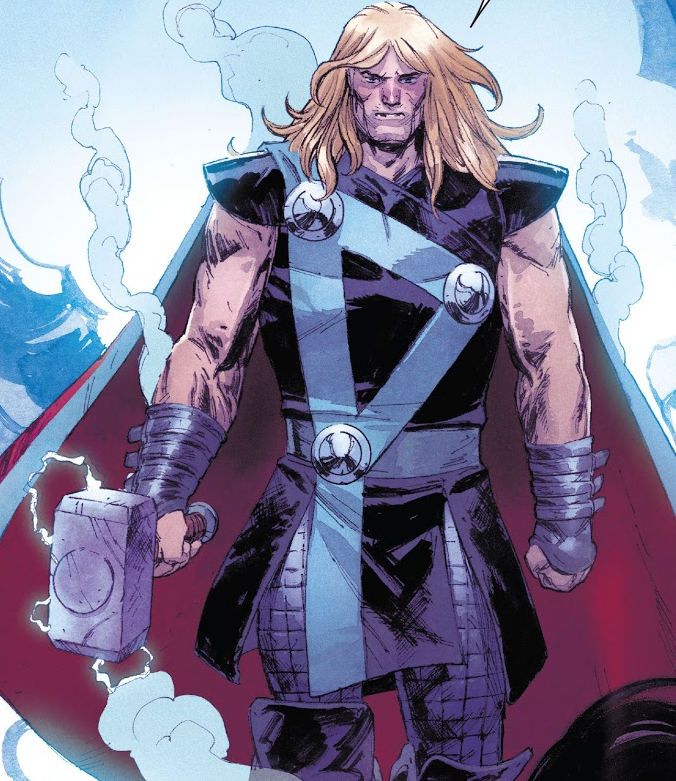