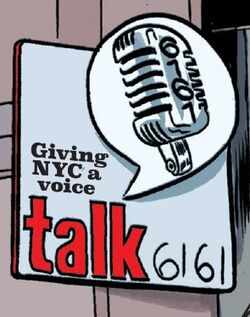 Talk 616! was a radio station located in Manhattan. When he was trying to get hold of Spider-Man to alert him of a bank robbery, J. Jonah Jameson stormed into the the station and interrupted a talk show to use its equipment to try to make the audience pass his message to Spider-Man. He began to argue with several callers, which prompted the radio host to give Jameson a segment. Jameson later asked his former rival Barney Bushkin to be his producer.[1] Jameson began to use his show, called Get to Work!, to rectify his years of slander against Spider-Man.[2] This yielded mixed results, since the audience liked Jameson when he used to bash Spider-Man, prompting Jameson's bosses to cut his shift.[3]

Retrieved from "https://marvel.fandom.com/wiki/Talk_616!_(Earth-616)?oldid=5582200"
Community content is available under CC-BY-SA unless otherwise noted.