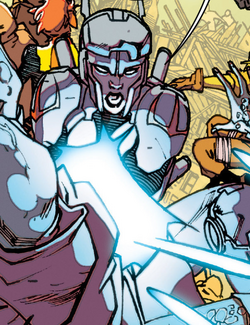 Tam Anderson stayed on as Chief Magistrate of Genosha after the fall of Cameron Hodge. She helped rebuild the nation after a number of years until it became infected with a mutant virus that plagued all the residents of the island.

She was a member of Havok's Press Gang when they tried to subdue a rebellion by the people in Hammer Bay due to a supposed food shortage. As they were cornered, the rest of the team showed up via their Quinjet, but the rebels overwhelmed Tam and the others.

Mystique was called in to impersonate the deceased Charles Xavier which helped calm the situation and restore order. After getting no help from God-Emperor Doom and Baron Grey, Tam suggested they invade X-City in order to kidnap the healer Triage.[1]

Going with the plan the team flew into X-Topia's airspace and ambushed the X-Men while they were playing a baseball game. During the battle, Tam stayed aboard the Quinjet to coordinate the mission. Waiting for the extraction, she plotted the plane in the cross-hairs to fire shots at Rogue but she saw this coming and threw Wolverine in a fastball special straight at the Quinjet destroying it and killing Tam in the process.[2]

Seemingly those of the Tam Anderson of Earth-616.

Like this? Let us know!
Retrieved from "https://marvel.fandom.com/wiki/Tam_Anderson_(Earth-24201)?oldid=5679631"
Community content is available under CC-BY-SA unless otherwise noted.