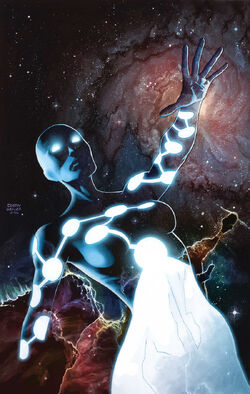 Tamara Devoux was a woman who suffered amnesia during a car crash, but also received the power of the Enigma Force, transforming her into Captain Universe. As Captain Universe, she joined the Avengers in order to maintain the equilibrium of the whole universe.[2]

Her first mission with the Avengers was on Mars to stop the powerful beings Ex Nihilo, Abyss and Aleph from terraforming the Earth in their image. When Tamara approached them, both Nihilo and Abyss recognized her as their goddess, and the physical manifestation of the universe itself, immediately submitting and agreeing to her terms. But Aleph did not, and attacked her. Captain Universe turned the robot to ashes with a single touch. Following Nihilo's submission, the Avengers returned to Earth.[3]

During a therapy session with Shang-Chi, Tamara discovered that after the car crash, in which her little daughter's fate was unknown, she was in a coma for ten years. The reason why the universe decided to become sentient was because it was broken and dying, and it chose Tamara because she was broken and dying as well. When Shang-Chi decided to tell the news to Tony Stark, she met "Blackveil", and managed to decode the language in which he was speaking, discovering he was announcing the universe was broken, and that the White Event was coming to Earth.[2]

When the Avengers embarked on a mission to defeat the Builders,[4] Tamara was captured and rendered comatose by the enemy forces. After the captured Avengers were freed,[5] the rogue Gardeners managed to use their powers to wake her up. Captain Universe arrived to the Builder Command Vessel and started defeating the Builders, who ordered their Alephs to auto-destroy along with whatever they could take with themselves as the tide of the battle had been turned.[6]

At some point, Tony Stark found her daughter, and the two were re-united. Tamara left the Avengers and began working as a waitress. When Tony and Steve Rogers met to discuss a solution to their conflict, they chose the diner where Tamara worked. In the midst of their discussion, the Captain Universe persona surfaced and attacked Tony, accusing him of knowing the reason of the early death of the universe from the start, and failing to stop it.[7]

Like this? Let us know!
Retrieved from "https://marvel.fandom.com/wiki/Tamara_Devoux_(Earth-616)?oldid=5723741"
Community content is available under CC-BY-SA unless otherwise noted.