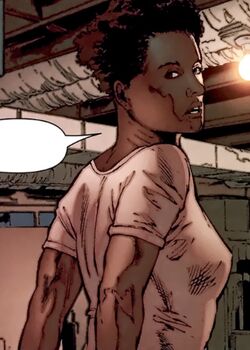 Tamara was a 5th-grade teacher living in Imperio and occasionally caring for her brother until Tony Stark showed up on her doorstep with her brother.[3] With her brother and Tony Stark, Tamara founded Imperio Techworks. Tamara even briefly had a romantic connection with Tony Stark. It was this romantic connection that caused the Pride to kidnap her with plans to sacrifice her to the Gibborim in the "Rite of Blood".[2] Fortunately, she and Tyree were saved by Iron Man, but in exchange for a truce with the Pride, Tony was forced to leave California. He appointed Tamara as the C.E.O. of Imperio Techworks before he left.[4]

Like this? Let us know!
Retrieved from "https://marvel.fandom.com/wiki/Tamara_Robinson_(Earth-616)?oldid=5518210"
Community content is available under CC-BY-SA unless otherwise noted.