This page should be split into two, Lady Gorgon for the Hand member from PWJ and Franken-Castle, and Tanya Adrian (Earth-616) from Punisher: In the Blood
Lady Gorgon 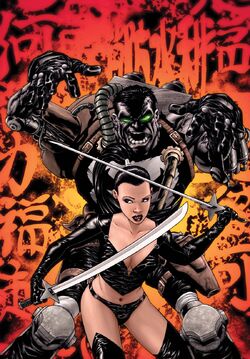 Tanya Adrian was an assassin in the Hand under the name Lady Gorgon. She was sent to kill the Punisher after the Hand were hired by Jigsaw. However, she failed due to interference from Silver Sable.[2]

After failing to kill the Punisher, Gorgon was kicked out of the Hand. To regain her honor, Gorgon planned to kill the Punisher, who had been turned into a Frankenstein-like monster called Franken-Castle. She hired three members of the Shaolin Scientist Squad to help her, but they failed, and Punisher killed two of them while Gorgon killed the remaining member so he didn't talk. Gorgon retreated to Japan and tried fighting Punisher using a magical Japanese sword. However, her plan for revenge ended when she was unexpectedly impaled with her magic sword by her former master, Kazu Yoshiokya.[3]

Gorgon survived and joined forces with Jigsaw and Rampage to kill Punisher. Gorgon disguised herself as Punisher's dead wife Maria Castle in order to psychologically torture Punisher. Thinking Gorgon was Maria, Punisher refused to fight her until his ally Henry Russo told him the truth. In a fit of rage, Punisher killed Gorgon.[1]

Like this? Let us know!
Retrieved from "https://marvel.fandom.com/wiki/Tanya_Adrian_(Earth-616)?oldid=6078091"
Community content is available under CC-BY-SA unless otherwise noted.