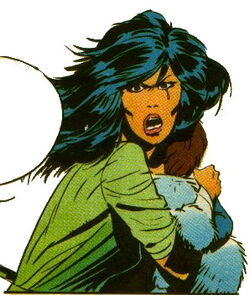 Tanya Ritinski met and married Dragon in 8159. By that time she already had a son, Michael Dragon whom Dragon adopted.[2]

The Dragons moved to a farm 50 miles west of London. Tanya did not approve of Dragon's obsession with his earlier successes as a Game player and did not want him to become a government enforcer for the National Union of Retired Sports Experts.

After the Wildcats' attack on their farm,[1] Tanya, with the help of their farmhand Saul Tesing, took Michael to her parents' farm.[3] Mad about Dragon's decision to return to his team, she did not tell him about her and Michael's whereabouts.[4]

Like this? Let us know!
Retrieved from "https://marvel.fandom.com/wiki/Tanya_Dragon_(Earth-5555)?oldid=5536928"
Community content is available under CC-BY-SA unless otherwise noted.