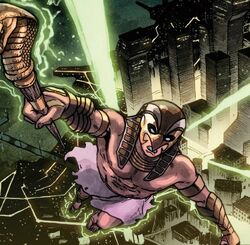 Tarik Fayad was the defender of Madripoor, using the Coptic Staff and the alias of "Horus" to protect the small island nation.

He was killed by Grant Ward, who was using a counterfeit Iron Man Armor, using intel from the stolen Quantum Drive, which contained information on how to defeat several major super heroes. Horus death was a demonstration of the legitimacy of the content of the Quantum Drive, meant to attract the attention of any potential bidder.[1]

Like this? Let us know!
Retrieved from "https://marvel.fandom.com/wiki/Tarik_Fayad_(Earth-616)?oldid=5073081"
Community content is available under CC-BY-SA unless otherwise noted.