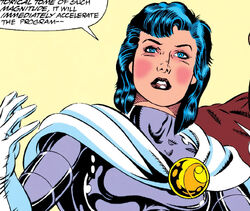 Tarin was a human in the 31st century when the Badoon had conquered Earth. She was transported to the 20th century when the Thing accidentally switched on a time transporting device in the Baxter Building. She then enlisted the aid of the Thing, Captain America and Sharon Carter who accompanied her to the future. When they were captured by the Badoon, Tarin contacted Zakkor, the leader of the human resistance against the Badoon. Tarin joined the resistance and managed to capture the Badoon leader, Drang, during the following battle.[1]

Most of Tarin's team members in the Commandeers were eventually killed.[2] She later became President of Earth and her teammate Old Redd was made Vice President. Her chief aims were to restore stability and literacy to the masses.[3]

Like this? Let us know!
Retrieved from "https://marvel.fandom.com/wiki/Tarin_(Earth-691)?oldid=4872775"
Community content is available under CC-BY-SA unless otherwise noted.