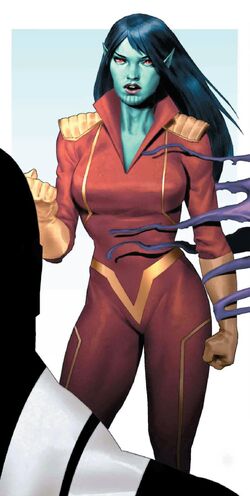 Tarna is a Skrull who used a Klyntar to act as an Agent of the Cosmos, a champion of the universe dedicated to protecting those in need, and she worked together with Myntril.

With the appearance of another Klyntar-wearing hero, the Earthling named Flash Thompson, aka Venom, Myntril and Tarna followed him for some time to see if he was worthy of being an Agent of the Cosmos. After one of Venom's missions, Venom's ship was abducted by Tarna's and Myntril's. In the landing bay, Tarna attacked Venom, initially refusing to believe he was one of them. Even after Myntril cleared everything up, Tarna treated Venom with hostility. Tarna was then put in charge of Venom's training, though Myntril noted she was unlikely to fulfil her duty.[1]

When the Agents of the Cosmos detected that the Venom symbiote was displaying an increasing amount of rage, Tarna tracked down its wearer to have the symbiote returned to the Cosmos and replaced. Tarna's hostile attitude created a misunderstanding and Flash refused, prompting a fight. The Venom symbiote then confronted Tarna personally and seemingly killed her symbiote with the afterburners of her ship before escaping.[2]

Flash's dedication to the Venom symbiote even after its relapse into corruption both confused and impressed Tarna, as it went against everything the Agents of the Cosmos had taught her. She assisted Flash in his search for it, but cautioned him that he should let the other members of his team handle Venom, as it likely intended on rebonding to and corrupting him. When the symbiote ambushed them attempting to lure Flash away from the group, Tarna was incapacitated and left behind.[3] However, she and the others managed to track Flash and the symbiote down and stop it from corrupting him.[4]

Having been impressed by Flash's loyalty to his symbiote and beginning to question her own to the Agents of the Cosmos, Tarna protested the symbiote's trial by combat but was warned that if she continued to do so she would be put on trial herself. She impersonated Myntril to allow Flash into the gladiatorial arena to assist the Venom symbiote, and engaged her mentor and the other Agents of the Cosmos in combat to buy them time. Myntril commended her loyalty to her new friends but chastised her disobeying orders, permitted her to accompany Flash on his mission to fully cleanse his symbiote but telling her when she returned she would be put on trial herself.[5]

While Flash and the Venom symbiote went to Earth to find Mania, Flash's protege who was bonded to a demonically-augmented clone of the Venom symbiote; Tarna led the others on an expedition to Wenb to retrieve an elixir that could temporarily cleanse Mania's symbiote of its corruption. While there they encountered the Space Knights, but were forced to work together to fight off a horde of trolls that attacked them.[6] Tarna's team and the space knights arrived on Earth in time to stop Mania from killing Venom and inject her with the cleansing serum, which restored her sanity. After this, Tarna defected from the Agents of the Cosmos, having been inspired to follow her own path, and joined the Space Knights.[7]

At some point rejoining the Skrull Empire, Tarna was selected as part of a squadron to accompany Talos on a mission to investigate a series of mysterious attacks on Skrull and Kree colonies on the edge of the galaxy. The culprits were revealed to be malicious symbiotes, which boarded Talos ship and picked off the squadron one-by-one. Pushed into an escape pod by Talos, Tarna was set adrift into space with orders to warn the next ship she came across of what was coming.[8] However, Tarna was intercepted and taken over by a symbiote, sent by Knull alongside the other members of Talos' crew to assassinate Emperor Dorrek VIII. Attacking him and his husband Wiccan on the Shi'ar resort planet of Little Chandilar, Tarna and the others were subdued and taken back to the Alliance for treatment.[9]

Tarna is brusque and aggressive, deeming Flash Thompson and the Venom symbiote unworthy of being Agents of the Cosmos and trying to kill them. Myntril mentions that Tarna is feared by all who have met her, and that while she was placed in charge of training Flash, she was unlikely to do so.[1]

Flash's loyalty to the Venom symbiote despite its corruption inspired Tarna to defy Myntril's orders and help him put a stop to the symbiote's trial-turned-execution, an act for which she was told she would be placed on trial to determine if she was worthy of being a member of the Agents of the Cosmos.[5] Deciding that she wanted to follow her own path, Tarna subsequently defected from the Agents of the Cosmos to join the Space Knights.[7]

Like this? Let us know!
Retrieved from "https://marvel.fandom.com/wiki/Tarna_(Earth-616)?oldid=6453414"
Community content is available under CC-BY-SA unless otherwise noted.