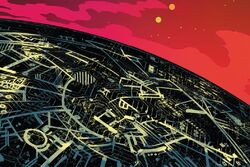 Roughly 100,000 years ago the Skrull capital was relocated to Tarnax IV, later renamed Throneworld.[1] Late in the 20th century, the Super-Skrull was presented to Emperor Dorrek VII by his scientists. After demonstrating his powers, he was sent against the Fantastic Four (FF) on Earth.[2] Later the ambitious warlord Morrat who had captured the FF in secret brought them back to Tarnax IV. Upon learning that Morrat had captured them and kept that fact from him, Dorrek VII ordered Morrat found and brought to him. The FF escaped, and during the fighting Morrat attempted to seize power and was killed by Dorrek's soldiers. Due to the FF saving his daughter Anelle, Dorrek was honor bound to let the FF go.[3]

Without authorization, Super-Skrull returned to the throneworld from his exile with three captives. He was taken prisoner and his captives were retrieved by Dorrek. Captain Marvel was forced to develop a Skrull version of the Omni-Wave Projector.[4] Captain Marvel escaped and freed Quicksilver and the Scarlet Witch, and then escaped from Tarnax IV by using the Omni-Wave projector.[5] The Illuminati arrived on the throneworld and warned the Skrulls to leave Earth alone. Dorrek ordered them captured and Black Bolt destroyed his ship. During their attempted escape they were captured. The Skrulls imprisoned and tortured the heroes, taking DNA samples from them. Eventually the Illuminati were able to escape. Dorrek ordered that super-soldiers be created using the DNA taken from them.[6]

The FF who were captured during the Skrull-Xandarian War were brought to the throneworld, where they were put on trial and metabolically boosted to die of old age within 3 days. They eventually escaped, and would have the effect reversed.[7]

The Herald Nova would later use the knowledge she gained from the Fantastic Four to lead Galactus to the Skrull throneworld. He consumed the planet, despite the best efforts of the Skrull defenders and the pleading of Professor Xavier who had ended up nearby in the Skrull war moon along with the X-Men.[8][9]

Like this? Let us know!
Retrieved from "https://marvel.fandom.com/wiki/Tarnax_IV?oldid=6127124"
Community content is available under CC-BY-SA unless otherwise noted.