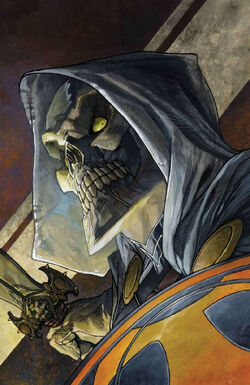 Tony Masters gained an ability known as "photographic reflexes" during a mission as a S.H.I.E.L.D. agent.[1] This ability enabled him to watch another person's physical movements and duplicate them without any practice, no matter how complex. It was only limited by the fact that the memories he gained by watching others overwrote his personal memories.[1] He was previously a naturally gifted athlete who trained himself to superb physical condition. He committed the fighting styles of Captain America, Black Panther, Daredevil, Elektra, Hawkeye, Punisher, Tigra, US Agent, Spider-Man and Wolverine to memory, as well as many others. The only known Marvel characters able to overpower his ability were Deadpool, because his fighting style was so random that it was too unpredictable, and the android Jocasta, due to her lacking body language like a human. He trained his body to be in peak physical condition and engaged in intensive regular exercise. His strength, endurance, stamina, reflexes, and agility were on the level of an Olympic athlete. He was nearly the physical equal of Captain America. In addition to his ability to copy the fighting techniques of others, he had mastered hundreds of forms of unarmed combat and had created some of his own original techniques as well. The Taskmaster was skilled in the use of all conventional weaponry. He was an unerring marksman as a result of the skills of various champions he committed to memory. These skills included most present-day and many historical martial arts, boxing, wrestling, swordsmanship, archery, marksmanship, gymnastics, aerial acrobatics and sleight of hand.