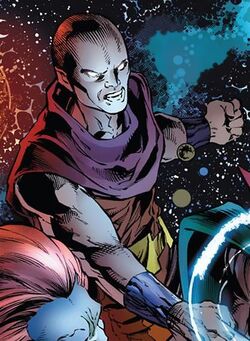 Like all the Elders of the Universe, Tath Ki's origin is lost in the early history of the universe. It is known that he is one of the oldest living beings in the universe. Like other Elders, he is the survivor of one of the intelligent races that evolved in one of the first galaxies to form after the “Big Bang”, the cataclysmic event in which the universe was created. Although his race became extinct and even his native galaxy died as the ages passed, the Tath Ki, like the other Elders, lived on, having become virtually immortal. As the relatively few survivors of the earliest period of the universe, the Elders regarded themselves as figuratively being brothers.[1] However, the Contemplator has declared that he was self-created, instead of being a representative of an evolved species.[citation needed]

Almost immortal, the Contemplator dedicated his life to develop the powers of mind and spirit, and using them to probe the mysteries of the universe. He was in complete harmony with the cosmos, to a greater extent than any other living being. He believed that each of his actions was dictated by the cosmos's "desires". Thus, he never feels anxious. Unlike other Elders, the Contemplator was a quiet pacifist with soft voice and an essentially benign being (although insufferably vain).

He rarely took part in the lives of "very inferior beings", except to show them the way to a greater illustration as he did with Steven Rogers (Earth-616) when he transported him through time to show him the essence of America[2] and with Jeffrey Mace in his self-appreciation of his accomplishments as the third Captain America using the identity of Mister Buda.[3]

He never collaborated with the Grandmaster in his evil schemes (although a Skrull impersonator who took on his form once did). The Contemplator dedicated most of his time to meditating and contemplating the infinite wonders of the universe.[4]

Following the Grandmaster's schemes, the Contemplator took possession of an Infinity Gem. He held it for a time until Thanos of Titan came to bargain for it.[5]

Accessing the power of a stolen Cosmic Cube, Thanos summoned a gathering of the astral versions of some cosmic heavyweights, including the Stranger, the In-Betweener, and several members of the Elders of the Universe. While Thanos briefly taunted them with the powerful item, the Collector coveted it, seeking to broker a trade. Tiring of the general exchange, Thanos turned the Cube on the other entities, seemingly wiping them from existence.[6] They had actually been teleported to the Cancerverse, as the artificial Cosmic Cube wasn't powerful enough to kill them. The Avengers and the Guardians of the Galaxy joined them soon after the Mad Titan tried to kill them as well. The Elders made a deal with the heroes, using a weapon from the Collector's vault, the Avengers weakened Thanos after returning to Earth. The united forces of Earth's heroes proceeded to defeat Thanos, and as part of the deal, the Elders got to decide what to do with him.[7]

The Deadpool Corps (Multiverse) was founded by Deadpool after he was chosen by the Contemplator to stop a cosmic entity known as the Awareness that devours the multiverse's consciousness. In truth, the Deadpool Corps's real power to stop the entity was their unique mind that ultimately made them absolutely immune to the entity.[8] The Deadpool Corps came into conflict with the Champion, who, along with the Grandmaster, did not see them as worthy heroes and decided to test them.[9] Fortunately, the Corps proved their worth by tricking the Champion into becoming stranded on a planet two times in a row.[10] With help from the Broken Blade, the Corps annihilated the entity who turned out to be a little alien that was the lone survivor of his species after the Big Bang.[11]

Comtemplator was attacked by the Magus and decapitated so he would be forced to reveal the location of the Soul Gem, which turned out to be within Ego the Living Planet. Comtemplator told Magus that he had countered his actions by letting others know about the Soul Gem. One of those others was Ultron/Hank Pym who ambushed Magus and killed him to retrieve the Soul Gem. After telling Ultron there was still hope for Hank, Comtemplator said he would go into a deep sleep that would last eons. Ultron then destroyed his head, leaving his decapitated body to slumber for years.[12]

The Contemplator possesses the normal human strength of a man of his apparent age, height, and build who engages in minimal regular exercise.

Like this? Let us know!
Retrieved from "https://marvel.fandom.com/wiki/Tath_Ki_(Earth-616)?oldid=6443110"
Community content is available under CC-BY-SA unless otherwise noted.