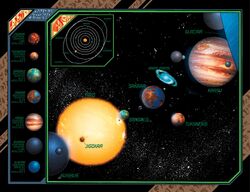 Tayo is the central member of the star system, a large star far outweighing all other members of the star system combined and holding all other members in orbit through its gravitational force. The remaining seven major members of the Tayo star system are planets, many of which are orbited by smaller satellite bodies of their own. All of the planets orbit Tayo in nearly the same plane, except for Glaciar, the outermost planet, whose elliptical orbit is slightly divergent.

Jigokar is the planet whose orbit lies nearest Tayo. As such, Jigokar is a fiery world whose landscape composed exclusively of volcanoes and dark-colored lava rivers. With surface temperatures ranging from 1,010° to 1,175°, Jigokar is thought to be incapable of supporting any organic life. Jigokar is obited by one satellite.

The second closest planet to Tayo, Tuksnesis, is a barren desert world covered in constantly shifting "oceans" of quartz sand. The smallest planet in the Tayo star system in both surface area and mass, Tuksnesis has an arid climate with surface temperatures ranging from 58° to 100°.

Gangalo is the third planet from Tayo, a humid world overrun with exotic vegetation and fungal lifeforms. With an oxygen-rich atmosphere and nearly 70% of the planet covered in bodies of fresh water, Gangalo is thought to be a planet capable of supporting various forms of life. However, scans have been unable to penetrate the planet's thick jungle canopies to determine whether there is any evidence of sentient life on the planet. Gangalo is orbited by two satellites, both of which share its climate and terrain.

Sakaar is the fourth planet from the star Tayo and is the only planet within the Tayo star system known to be inhabited by sentient life. The planet and its moons are currently inhabited by four main sentient species, although the question of which of these species is actually native to the planet is a debated topic among the inhabitants. In addition, various other off-world species have become stranded on the planet's surface in recent years. Sakaar is considered a savage planet that is full of extremes. However, it is the most geographically diverse planet in the Tayo star system. Outer regions once included great deserts with incredible rock formations, tropical paradises at the foothills of steaming volcanoes, mountainous artic wastelands, great archipelagos, lakes, and oceans. Sakaar exhibits vast expanses of untamed wilderness populated by a great variety of dangerous non-sentient creatures, both large ad small. The planet is orbited by two satellites: Aakar and Sabyr ("the Broken Moon").

Kaasu, the fifth planet in distance from Tayo, is a gas giant and the most massive planet in the star system. Composed primarily of nitrogen, hydrogen, and methane, Kaasu has no solid surface and no topographical features. Although the surface may appear solid from space, it is merely the effect of layer upon layer of gaseous clouds surrounding a metallic core. Massive lightning storms, often visible from space, constantly from in the planet's lower atmosphere. With the most powerful magnetic field of all the star system's planets, Kaasu is orbited by three satellites.

As the sixth planet in the Tayo star system, Suishus is devoid of any organic life. Its terrain is composed exclusively of metals and precious stone deposits. Surface temperatures of the geologically dormant planet range anywhere between -20° and 30°. Suishus has one satellite; however, the orbit of this satellite has deviated over the centuries due to the magnetic pull of the neighboring planet Kaasu. It is speculated that Kaasu's more powerful magnetic pull may one day draw the satellite completely out of Suishus' orbit.

The seventh and outermost planet in the Tayo star system is Glaciar. With a unique elliptical orbit, Glaciar drifts the furthest away from Tayo's life-giving light and, as such, has the coldest climate of the Tayo planetoids, with temperatures ranging between -250° and -200° (which can also be attributed to the planet's atmospheric composition). The landscape of Glaciar is comprised entirely of enormous, crystallized glaciers and ice shelves. Glaciar is orbited by two satellites.

Like this? Let us know!
Retrieved from "https://marvel.fandom.com/wiki/Tayo?oldid=4210779"
Community content is available under CC-BY-SA unless otherwise noted.