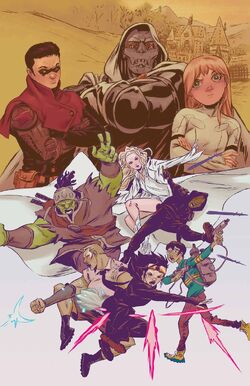 After a fight between the Night Witches and Frostbite landed them and several unlucky bystanders in detention on the day before the final exam at the Victor von Doom Institute for Gifted Youths, the detained students reluctantly agreed to team up to complete the exam in order to avoid expulsion;[3] however, during the exam Pixie was killed, and the team discovered that the faceless opponents they were fighting were, in fact, their own classmates, and thus the fatal blows they'd struck against them had caused real deaths. Horrified by this revelation, the team resolved to flee the Institute.[2]

Retrieved from "https://marvel.fandom.com/wiki/Team_Puce_(Earth-15513)?oldid=4559382"
Community content is available under CC-BY-SA unless otherwise noted.