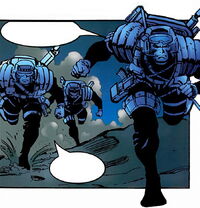 I don't think they realize they are about to go head-to-head with the bio-technically advanced products of the Weapon X Program.

Team X seemingly had a similar history as its Earth-616 counterpart except that Berlin wasn't there last mission.

Weapon X sent the strike team to destroy the Numidian Army's super-soldier program. David North, Logan, and Victor Creed broke into the facility while John Wraith ran surveillance from the Lockheed SR-71 Blackbird. Once inside, they were confronted by Madamoiselle Mirielle Duplessis and Omega Red, mercenaries hired by the Numidian Army.

Retrieved from "https://marvel.fandom.com/wiki/Team_X_(Earth-7642)?oldid=5551641"
Community content is available under CC-BY-SA unless otherwise noted.