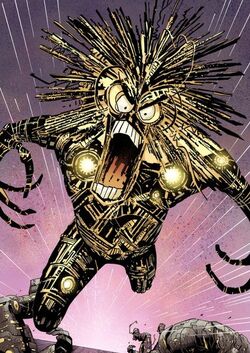 Though previously believed to be the progenitors of the Phalanx,[2] a technarch has been said to be an artificial intelligence manufactured by a Phalanx.[1] A technarch's purpose is to classify existing societies and either remove or repurpose them. A singular node of a technarch is referred to as a Kvch; previously believed to be the name of a singular homeworld,[3] a Kvch can take the form of any sort of planet object or series. Each Kvch is controlled by it's own Magus. Each technarch believes itself to be the only technarch, and are unaware of the role of Phalanx in their origins.[1]

Like this? Let us know!
Retrieved from "https://marvel.fandom.com/wiki/Technarchy?oldid=5620346"
Community content is available under CC-BY-SA unless otherwise noted.