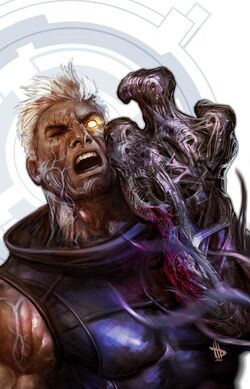 The Techno-Organic Virus converts living matter into technology, ultimately consuming its host. The converted life continues to "live" and function, but is driven by the desire to spread to other lifeforms. The virus has no known antidote, although it can be held in check by telekinesis and other powers. The Techno-Organic Virus also has the ability to re-animate dead life. The exact origin of the Techno-Organic virus is unclear.

Apocalypse was introduced to the virus from a young Nathan Summers, calling himself the Traveler. In a battle between Traveler and Apocalypse, they were both cut and Ozymandias, Apocalypse's servant, had Apocalypse's body returned to the newly-found Celestial Ship, that Apocalypse, at that time, could not understand or communicate with. With Traveler's blood mixed with the Techno-Organic Virus and his own, Apocalypse was healed in a chamber of the ship and, infected with the virus, could then understand the ship. Years later, Apocalypse used the virus to infect Nathan Christopher Charles Summers as an infant, leading to his transport to the future and his growing up to be Cable. It was possible that Apocalypse used this knowledge of past/future events to infect infant Nathan Summers so that he himself would become Apocalypse in the past.[1]

A heavily modified version of the virus was later used again, by Stryfe, a clone of Cable created after he arrived in the future that was raised by Apocalypse, in an attempt to kill Professor Charles Xavier. For reasons completely his own, Apocalypse cured Professor X of the virus.[2]

On Earth-29283 the warlord Gaunt had infected himself with mild T-O Virus that he kept in check with nano-machines, this allowed him to replace any lost part with new stronger cybernetic upgrades. During a fight with Cable however he was infected by Cable's much stronger version and was paralyzed and left in agony.[3]

Like this? Let us know!
Retrieved from "https://marvel.fandom.com/wiki/Techno-Organic_Virus?oldid=6436694"
Community content is available under CC-BY-SA unless otherwise noted.