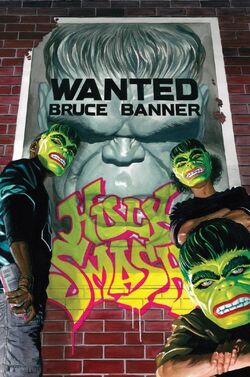 The Teen Brigade was a team of teenagers coordinated by Rick Jones during the time he was the Hulk's and later Captain America's sidekick. They first banded together to help the Hulk defend earth against the Metal Master.[4] Their original job was to transmit messages to the heroes about current villains or situations that arose.

When Loki's manipulations made the Hulk seem to be a public menace, the Teen Brigade tried calling several of Earth's heroes to help, amongst them the Fantastic Four. Instead, Iron Man, Thor, Ant-Man and the Wasp responded, leading to the founding of the Avengers.[5]

They became regular allies and informants to the Avengers and were in close contact. After he was awakened from his suspension in ice, Captain America showed the acrobatic tricks and offered to teach them self-defence moves.[6] They assisted the Avengers during their fight with Baron Zemo and his Masters of Evil,[3] as well as in their fight against Kang the Conqueror, infiltrating his ship and freeing the trapped Avengers.[7] They also helped to do research to find a cure for Wonder Man's illness.[8] One of their members, Bill, inadvertently helped lure the Avengers into a trap when he showed Rick Jones an ad in a newspaper (placed by Immortus) promising superpowers, which resulted in Rick being held hostage by Immortus.[9]

Teen Brigade utilizes the most cutting-edge communication technologies. Due to the Sliding Timescale, this type of communications equipment varies from reference to reference (See Notes for more details

Like this? Let us know!
Retrieved from "https://marvel.fandom.com/wiki/Teen_Brigade_(Earth-616)?oldid=5551651"
Community content is available under CC-BY-SA unless otherwise noted.