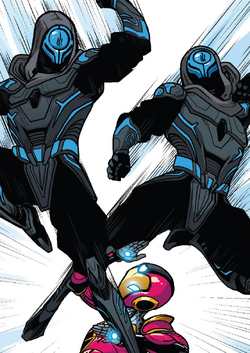 The Ten Rings was a secret society that have built their principles around the Wellspring of Power. The group's first target was the armored hero Ironheart who was ambushed by two unknown Wellspring-powered assassins as try tried to coerce her to give in to the power. She attacked them but they mysteriously vanished after.[1]

The Ten Rings then sent their operative Midnight's Fire to fight the hero in order to test her convictions and see if she was worthy to join them.[2] Riri learned that the Ten Rings was a terrorist organization so covert that some people believe they are a myth. They have no political agenda, regional focus, or center of operations. Chord described his past history involving the well and how his agenda lines up with the Rings' prerogative. He offered her a place among them as his heir. but she outright refused which caused another fight between the two.[3]

The Rings played a part in trying to get Councilman Birch elected as governor of Illinois. Using children to commit crimes in order to make himself look better for the election, Midnight's Fire showed up to stop Ironheart from meddling in the Ring's affairs but the confrontation resulted in the arrests of both Birch and Chord.[4]

The Rings then sent Eclipse to Chicago to perform a magical rite that transformed the citizens into a zombie horde. Ironheart and the Wasp ventured to O'Hare Airport where Eclipse performed the ritual and fought against her which undid the zombie spell after she teleported away.[5]

Like this? Let us know!
Retrieved from "https://marvel.fandom.com/wiki/Ten_Rings_(Earth-616)?oldid=5684476"
Community content is available under CC-BY-SA unless otherwise noted.