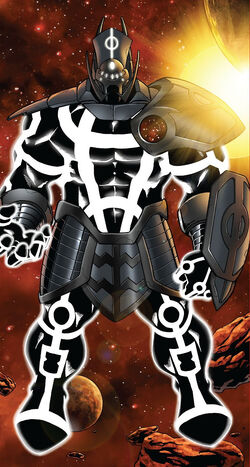 Tenebrous maintained the "Black", living matter that held the universe together.

Tenebrous was corrupted by Diableri. He was defeated by Galactus and imprisoned in the Kyln.

Tenebrous and Aegis were then freed by Annihilus' forces during the destruction of the Kyln. After their escape, they then later encountered Thanos, who convinced them to defeat Galactus along with the Silver Surfer and deliver them to Annihilus for experimentation. After the events of the Annihilation Wave, Teneberous and Aegis return to the Kyln, discovering the carcass of Antiphon. Galactus, having escaped from containment, seeks to bring a final close to the ambitions of Aegis and Tenebrous. Galactus sends the Silver Surfer ahead to detain them until he arrives. The Silver Surfer engages both Aegis and Tenebrous in battle, and manages to channel the energies of the nearby Crunch, the barrier that separates the universe from the Negative Zone. Overwhelmed by the Crunch energies, Tenebrous meets his death.[1]

However, he and Aegis appear to have survived their encounter with the Surfer, as they reappear with Galactus, the Celestials, and other cosmic entities opposing the forces of the Cancerverse. While Aegis is destroyed in the war, Tenebrous appears to have survived, and his current status is unknown.[2]

Tenebrous is believed to possess the Power Cosmic, which enables him to gather, channel and manipulate large quantities of cosmic energy.[3] He was also shown to have physical prowess matching that of Galactus.

He was stated to have a "Global/Universal" threat level by the Nova Corps.

Like this? Let us know!
Retrieved from "https://marvel.fandom.com/wiki/Tenebrous_(Earth-616)?oldid=6438740"
Community content is available under CC-BY-SA unless otherwise noted.