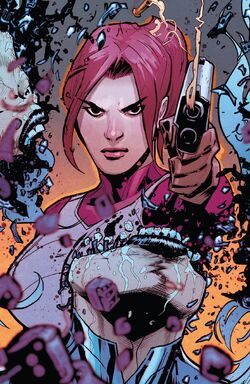 Teresa Parker was the daughter of C.I.A. agents Richard and Mary Parker, and the younger sister of Peter Parker.[1] After the death of their parents, Peter was sent to live with their Aunt May and Uncle Ben, while Teresa, whose birth had been kept a secret, was adopted.[5] Many years following the deaths of Richard and Mary, Teresa was personally recruited into the C.I.A. by Nick Fury.[7] Teresa's true parentage became a mystery, even for her. During her adult life, the machinations of Kingpin and Mentallo made it seem like Teresa's belief that she was Richard and Mary Parker's daughter was the result of Mentallo's manipulations.[5]

Teresa first came into Peter Parker's life after saving him from mysterious gunmen. She drove to the site of the shooting, which was near Peter's apartment, and managed to escort Peter to safety after revealing her identity, claiming to have recently discovered that she was Peter's sister, despite Peter's skepticism. Teresa then told Peter that both of them were targeted and would be killed unless they took action. At Hotel Metropolis in Monaco, more assassins set upon the Parkers, and Peter was forced to change into Spider-Man to confront them, as Teresa wondered about his whereabouts. After the skirmish, Teresa and Peter made their way to meet their contact once more, after learning he was not at the casino. On the way, Peter once again demanded answers from her. She revealed that she was investigating a massive criminal enterprise taking shape in Europe, and that Peter was somehow going to be involved in it. She immediately looked into his background and dug into the files of his parents, finding conclusive records of her birth and being orphaned shortly after; however, Peter was still confused.

Later, both of them finally met Emile Chigaru, who claimed to be the mission controller of Peter's parents. They made their way for Cairo, as Emile picked up the cup Teresa drank from, deep in thought. After evading another ambush by the Kingpin, Teresa discovered Peter's identity as Spider-Man. Forced to ditch his damaged costume, Teresa handed Peter a spare costume based on the black suit. They entered the Cairo ruins, only to bump straight into the Kingpin and his henchmen. The Kingpin then commanded Mentallo to turn off the effects of the perception filter on Peter and Teresa, which revealed her true looks. Fisk then claimed that Teresa's true last name was Durand, and that she was not Peter's kin. Holding Teresa at gunpoint, Kingpin then demanded Peter open the secret vault, unleashing the robot known as the Sleeper. Teresa then fought the Kingpin as Peter wrestled with his new foe.

After Peter defeated the Sleeper and the Kingpin, Teresa wanted to kill the latter as revenge for what he did to her. Peter tried to convince her against it. Relenting, Teresa was caught by an uppercut the Kingpin threw out, causing a stray shot from her pistol to hit Peter, as the Kingpin started to strangle her, saying that she should have accepted his offer of serving him. Mentallo, at this point, snuck up behind Kingpin and unleashed a massive wave of energy that knocked everyone, including Teresa, unconscious. When Teresa regained consciousness, she was able to piece together an account on the events that transpired with Peter's assistance; however, she had lost her memory of Peter being Spider-Man. The two then bid each other goodbye. Back at Emile's residence, it was revealed that he had tested the DNA from the cup Teresa had used. Obtaining the results, he smiled and wondered what to make of it.[5]

Following this adventure, Teresa decided she needed a fresh start and left the C.I.A. to join a S.H.I.E.L.D. division called the Gray Blade that specialized in performing international hostage rescues and intel gathering. Teresa became a fugitive after learning of a program named "Project Twilight", which consisted of an exhaustive plan to take down both superheroes and supervillains. After deleting all traces of the project from Gray Blade's systems and hiding the only known back-up in the form of nanofluids in her bloodstream, Teresa sought the help of Peter Parker, having regained the memories that he was Spider-Man.[8]

Since Spider-Man was in the process of investigating a supply network of retrofitted untraceable Stark phones, Teresa assisted him in confronting the Kingpin, who was involved in the operation. To this end, she was provided with spare superhero equipment by Hophni Mason, a superhero outfitter.[2] Later on, she helped Spider-Man save Hophni from an attack by the Vulture.[4] Since Teresa had been spotted by Gray Blade operatives with Spider-Man, they arrested Peter himself due to his alter-ego being supposedly his bodyguard.[9] With the Human Torch's help, Teresa freed Peter.

When Peter was trying to get Teresa out of New York, they were attacked by numerous criminals sent by the supervillain outfitter Tinkerer.[3] After returning to Hophni's lab, Mason convinced Teresa to take her to another laboratory to extract the Gray Blade data from her body to take the target off her back. In reality, Hophni turned out to be nothing but a disguise used by the Tinkerer.[10] He extracted the data so to fill in the gaps of his own archive of anti-superhuman contingencies.

The Tinkerer's lab was attacked by Gray Blade operatives, and Teresa was rescued by J. Jonah Jameson, who had been investigating the Tinkerer with Betty Brant and they had stumbled upon his lab. In the middle of the confusion, Betty also destroyed the machines containing the data extracted from Teresa. Almost immediately following the Tinkerer's defeat, an armada of the alien known as Vedomi appeared. Since the Tinkerer had expected their arrival, but notes detailing how to repel them had been lost years into the past, Spider-Man decided to use a Time Platform lent by Iron Man to retrieve the information. Teresa joined him in this journey.[11]

Once having arrived to an alternate timeline set in the past, Teresa took the liberty to contact Nick Fury, who at the time was still working for the C.I.A., in hopes of learning about her parentage.[7] After exploring Richard and Mary's old safe house, Teresa discovered a secret room that contained numerous files, including her birth certificate, which confirmed she was the Parkers' daughter.[1] While continuing her original mission, Teresa received from a Vedomi scout the Tinkerer had been friends with a capsule capable of stopping the invasion.

Spider-Man's actions in the past unwittingly resulted in his past counterpart deciding to stop being Spider-Man.[12] When Peter, Teresa and Jameson left to their present, they accidentally travelled forward in time within the alternate timeline, and were met with a world in which President Harry Osborn became a puppet for his totalitarian father Norman Osborn, and Peter Parker was a milquetoast inventor. The time-travelers freed Doctor Doom from prison to help them set up a Time Platform in Oscorp's possession. The ensuing adventure resulted in this timeline's Peter becoming inspired and deciding to be Spider-Man once again. Peter, Teresa and Jameson then left this timeline for good and returned to their own.[13] Peter infiltrated the Vedomi mothership to introduce the capsule's nanorobotic components into its core,[14] overriding the Vedomi's directive and making them think the planet they were just ransacking was completely barren, prompting them to leave. Teresa rescued Peter after he fell from the departing mothership. The following day when Peter was preparing to have Teresa meet their Aunt May, Teresa decided to turn herself in because, despite the Gray Blade's activities, she did steal files from a government agency. Before walking away, she promised Peter to see him soon.[15] Teresa was subsequently placed under custody.[16] Once she was eventually released, Peter finally introduced her to their Aunt May without revealing Teresa's true identity.[17]

After learning that her S.H.I.E.L.D. partner and lover, David Albright, had been kidnapped by the Chameleon, Teresa sought Peter's help to find him. They succeeeded, but when they located David, he had already been tortured and killed by the Chameleon for information.[17] Teresa managed to track down the villain, and intercepted a meeting between him and the Foreigner with Spider-Man's help.[18] Following a skirmish during which the Chameleon fled, Teresa and Peter learned that the Foreigner had purchased doses of the Infinity Formula from the Chameleon, whose location he had obtained from torturning Albright, in order to help a heavily sick Silver Sable in her efforts to save her country Symkaria from Countess Katarina Karkov. Teresa refused to become involved in the Symkarian civil war and walked away since her primary target, the Chameleon, had escaped.[19]

Following a failed assassination attempt on Doctor Doom under Karkov's orders, Manhattan was besieged by an army of Doombots in retaliation.[20] Karkov exposed the Chameleon as one of the people involved in the assassination plot, and facilitated the criminal's location to Teresa. When she was heading to the Chameleon's hideout, Teresa was approached by Spider-Man for help in fending off Doom. After Teresa apprehended the Chameleon,[21] Spider-Man confronted Doom and managed to appease him, putting an end to the siege. In the aftermath, Teresa had the Chameleon arrested and interrogated.[22]

Espionage: Teresa was trained to become a professional spy.[7]

Teresa's only known character weakness is her being emotional compromised. Such as when her partner was killed, Chameleon used that against her to still get what he wanted, even when confined to a detention cell.

Wing Suit: When Spider-Man sought Hophni Mason's help to outfit Teresa, she was provided with a pair of wings that allow her to fly.[2]

Non-Lethal Guns: When outfitted with Hophni Mason's equipment, Teresa was given a pair of guns that fire non-lethal alternatives like taser and ice bullets.[2]

Like this? Let us know!
Retrieved from "https://marvel.fandom.com/wiki/Teresa_Parker_(Earth-616)?oldid=6514980"
Community content is available under CC-BY-SA unless otherwise noted.