Not to be confused with Tierra Verde
Terra Verde 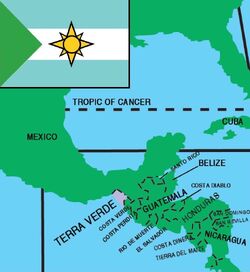 Terra Verde, officially Republic of Terra Verde is a country located in Central America. It is bordered by Mexico to the north and east, the Pacific Ocean to the west and Costa Verde to the south.[2]

This Mayan-culture country was ruled by General Robles. Alchemist Diablo took control of the minds of Inhumans Crystal and Lockjaw, and used them in a plot to take over Terra Verde by making the commoners believe that Crystal was the goddess Ixchel and using her powers against Robles' army. The Human Torch reached Terra Verde and, while he fought Robles' troops, he also tried to make Crystal recover her mind[3] but she even attacked the Torch. The Fantastic Four followed the Torch there and joined the fight. As Diablo's potions had temporary effect, Crystal and Lockjaw finally recovered just when Diablo had captured Robles and intended to make him publically surrender the country in Ixchel's temple. When Robles tried to escape and take over Diablo's potions, he instead caused the potions to explode, blowing up the whole temple.[4]

Like this? Let us know!
Retrieved from "https://marvel.fandom.com/wiki/Terra_Verde?oldid=5749844"
Community content is available under CC-BY-SA unless otherwise noted.