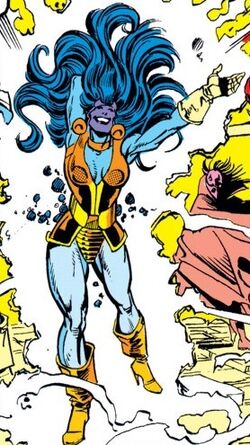 When Death turned her back on Thanos while he was in possession of the Infinity Gauntlet, Thanos created a new partner and equal who he named Terraxia. He created Terraxia in his likeness but still left her with some frailties. Terraxia was with Thanos as well as Death, Starfox, Nebula, and Mephisto when the remaining Earth heroes arrived on Thanos’ Space Palace.[1] She quickly joined the battle when Thanos was attacked by the invading Earth heroes. She ripped off Iron Man‘s head and beat Spider-Man to death with a rock.[2] She stood by Thanos while he finished off the rest of the heroes and when he defeated the cosmic beings. After the attack by the cosmic beings Thanos became the new Eternity leaving his corporeal form an empty shell. Once his mind left his body Nebula grabbed the Infinity Gauntlet and undid all of the deaths caused by Thanos and Terraxia. Nebula then teleported Thanos and Terraxia into deep space. Thanos, having neglected to create Terraxia without the need to breathe, watched as she died from lack of oxygen.[3]

Terraxia had superhuman strength, speed, endurance, and durability. She also could project energy blasts and survive in space to some extent.

Terraxia still needed to breathe, despite her other aspects of space survival.

Like this? Let us know!
Retrieved from "https://marvel.fandom.com/wiki/Terraxia_(Earth-616)?oldid=5533531"
Community content is available under CC-BY-SA unless otherwise noted.